'I hope that you aren’t suggesting that I don’t have my own mind,’ Barrett tells senator 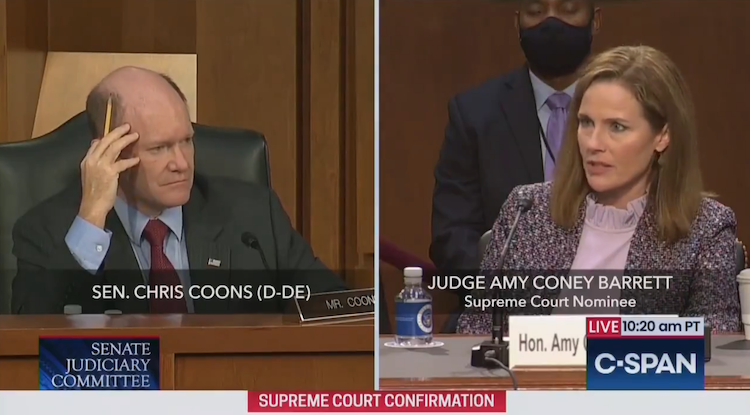 Coons began by asking Barrett about Griswold v. Connecticut, the 1965 Supreme Court decision that held that married couples have the right to use contraceptives in the privacy of their home. Scalia had said the case was wrongly decided. Coons asked whether Barrett agreed.

Barrett said she couldn’t express a view, but she did think Griswold is very “unlikely to go anywhere” because no legislature will outlaw contraception. Barrett use the word “very” multiple times.

As Coons continued to ask about the decision, Barrett said Coons’ questions appeared to be laying the groundwork for questions about whether Roe v. Wade was wrongly decided. And Barrett said she couldn’t opine on the issue.

Coons went on to say that Griswold anchored a lot of cases involving privacy interests, including the right to same-sex marriage established in Obergefell v. Hodges. Scalia had dissented in the case.

Coons also said Scalia was the sole dissenter in a 1996 case striking down a male-only admissions policy at the Virginia Military Institute. Coons asked whether Barrett agreed that Ginsburg’s majority decision in the case was wrong.

Barrett responded that she shares Scalia’s approach to originalism and textualism, but she doesn’t always agree with the way that he applies those principles.

“I hope that you aren’t suggesting that I don’t have my own mind,” Barrett said.

Barrett said that, when an issue is presented to her, she does not check to see what Scalia said about it.