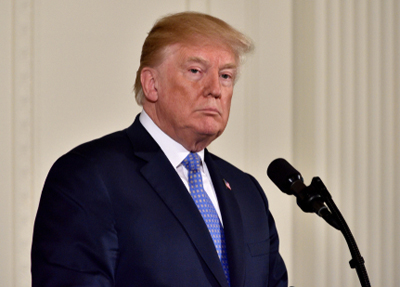 Could a 1969 case involving a Ku Klux Klan leader protect President Donald Trump from incitement charges in connection with the Jan. 6 riot on the U.S. Capitol?

The decision held that advocating the use of force is protected under the First Amendment unless it is “directed to inciting or producing imminent lawless action and is likely to incite or produce such action.” The defendant in the case was Klan leader Clarence Brandenburg, who was charged under an Ohio law for advocating violence during a rally.

Bloomberg Law, the New York Times and Reuters have stories on the impact of the decision.

Trump told his supporters in the Jan. 6 speech that the election had been stolen, and they should march to the Capitol.

“If you don’t fight like hell, you’re not going to have a country anymore,” he said. He told his supporters to “show strength” and to “fight much harder.”

But he also stated, “I know that everyone here will soon be marching over to the Capitol building to peacefully and patriotically make your voices heard.”

For charges to stick, prosecutors would have to show that Trump intended to incite violence, according to Bloomberg.

The New York Times outlined possible charges in a case of intentional incitement. They include:

• Section 373 of Title 18 of the U.S. Code, which bans soliciting another person to use “physical force against property or against the person of another.”

• Section 1322 of the District of Columbia’s Title 22, which bans incitement to riot.

One expert who thinks Brandenburg would shield Trump is Eugene Volokh, a professor at the University of California at Los Angeles School of Law.

Lawyer Paul Smith, who has argued for liberal causes at the U.S. Supreme Court, agreed in an interview with Reuters that Trump’s speech didn’t go so far as to lose First Amendment protection.

“If he was there with a bullhorn in the outside yard of the Capitol and urging people to charge the windows and break them and take Congress hostage, in that situation he would be responsible for what the crowd did,” Smith told Reuters.

But two Harvard University law professors—Laurence Tribe and Einer Elhauge—are among those who disagree with Volokh.

Tribe told Bloomberg Law that Brandenburg does not protect Trump.

“This guy was inciting not just imminent lawless action, but the violent decapitation of a coordinate branch of the government, preventing this peaceful transition of power and putting a violent mob into the Capitol while he cheered them on,” he said.

In a Washington Post op-ed, Elhauge pointed to the words at issue in Brandenburg. The Klan leader said, “If our president, our Congress, our Supreme Court, continues to suppress the white, Caucasian race, it’s possible that there might have to be some revengeance taken.” The speech also referenced a march on Congress that was scheduled to take place in two weeks.

“In contrast, Trump riled up a mob a short walk from the Capitol right before Congress was scheduled to count the certified electoral votes,” he wrote.

Elhauge also cited Trump’s prior remarks and tweets. Trump said the goal was to “stop the steal” and said, “They’re not taking this White House. We’re going to fight like hell.”

“Trump thus clearly incited lawless action (obstructing the operations of Congress is a crime) that was imminent (right after the speech, a short walk away),” Elhauge wrote.

Elhauge also argued that Brandenburg protections should be lower for presidents than for private actors. That’s because presidents have greater power to organize large mobs, and they have more power to impede law enforcement and to pardon lawbreakers, he said.