A federal judge in Atlanta has said he will sanction a lawyer who filed a RICO suit against two lawyers who filed hundreds of lawsuits against businesses for violations of the Americans with Disabilities Act.

U.S. District Judge Steven Grimberg of the Northern District of Georgia said lawyer Hassan Elkhalil or his law firm, Elkhalil Law, will have to pay attorney fees for filing a baseless RICO suit, and Elkhalil will have to attend four hours of continuing legal education on federal procedure, according to the Daily Report Online.

Grimberg identified a second lawyer for the RICO plaintiffs as Charlotte Carter of Elkhalil Law but said it was unclear whether she should have any responsibility for the sanctions. Carter and Elkhalil represented two businesses as plaintiffs in the RICO suit after they were sued in the ADA litigation.

Grimberg is an appointee of President Donald Trump.

The businesses filed the would-be RICO class action in August 2019 against lawyers Craig Ehrlich of Atlanta and Douglas Schapiro of Boca Raton, Florida.

The businesses alleged that Ehrlich and Schapiro had filed 558 lawsuits in the Northern District of Georgia for alleged ADA violations that were part of a criminal enterprise of filing fraudulent claims. The businesses sued in the ADA litigation were mostly owned by immigrants who couldn’t afford lawyers and were pressured to settle, according to the RICO suit. 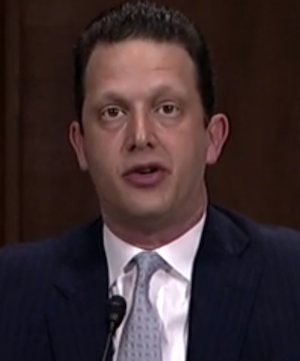 U.S. District Judge Steven Grimberg of the Northern District of Georgia in 2019. Photo from Wikimedia Commons.

Other defendants in the RICO lawsuit included an ADA consulting company owned by Schapiro and some disabled people involved in the ADA litigation.

Despite the lawsuit allegations, Elkhalil was unable to identify “a single fraudulent statement, filing or activity” by the lawyers he sued, Grimberg said.

In addition, Grimberg said, the suit is barred under precedent in the 11th U.S. Circuit Court of Appeals at Atlanta. The precedent holds that RICO extortion claims can’t be based on the filing of lawsuits or the threat of filing.

The 11th Circuit’s reasoning “applies even more so in this case, where plaintiffs’ RICO claims are predicated on the novel theory that the frequent filing of ADA litigation is somehow illegal,” Grimberg said.

The plaintiffs “appear to take issue with the ADA itself and its process for filing litigation,” Grimberg said. “Plaintiffs, it seems, are petitioning the wrong branch of government about their statutory grievance.”

Grimberg said sanctions were warranted because the RICO claims were frivolous.

“This action is not one that simply seeks to advance a novel legal argument or one of first impression,” Grimberg said. “Rather, it is a retaliatory action brought against disabled plaintiffs and their attorneys who successfully sued plaintiffs for admittedly meritorious ADA violations. Plaintiffs had no good faith, viable legal theory or factual support to smear defendants with allegations of criminal activity.”

Elkhalil did not immediately respond to the ABA Journal’s emailed request for comment.

The case is Ghandi v. Ehrlich.