Former ABA president dies at 85; he was 'a champion' for the rule of law and open government 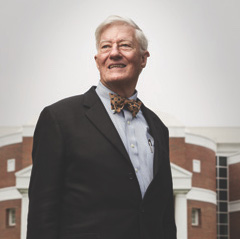 Talbot “Sandy” D’Alemberte—a former ABA president who championed the rule of law throughout the world—died Monday at age 85.

D’Alemberte was ABA president from 1991 to 1992 and helped found the ABA’s Central European and Eurasian Law Initiative in 1990 to help former Soviet bloc countries rebuild their court systems. The program was expanded to cover all the world’s regions and is now called the Rule of Law Initiative.

In a statement, ABA President Bob Carlson said D’Alemberte will be missed, but his many achievements will live on. D’Alemberte “was considered one of the leading advocates for human and civil rights around the world, a pioneer of dispute resolution, a constitutional expert and a champion of open government,” Carlson said.

D’Alemberte received the ABA Medal, the association’s highest honor, in 2003.

He also helped establish FSU’s Center for the Advancement of Human Rights, the first center of its kind in the nation. The center helped victims of human trafficking, torture and war crimes, as well as people seeking asylum.

D’Alemberte was also a state legislator in Florida’s House of Representatives from 1966 to 1972, according to obituaries in the Tampa Bay Times and the Tallahassee Democrat. He once practiced law at Steel Hector & Davis, which merged with Squire Sanders & Dempsey in 2005. The firm is now known as Squire Patton Boggs.

D’Alemberte died Monday when he collapsed at a rest stop while on the way home from the Mayo Clinic in Jacksonville, where he recently had knee surgery, according to the Tampa Bay Times and the Tallahassee Democrat. His wife, lawyer Patsy Palmer, was with him. He is also survived by his daughter, Gabrielle, and his son, Joshua.

One of D’Alemberte’s friends, Steve Uhlfelder, praised D’Alemberte as a public servant on Facebook, according to the Tallahassee Democrat.

“He was a national treasure,” Uhlfelder wrote. “He always saw the best in others and treated everyone with respect. They don’t make them any better than him.”

Next:
Former US attorney gives up his law license after he's convicted for stalking