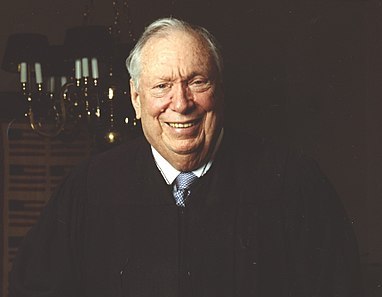 Accusations of sexual harassment against the late Judge Stephen Reinhardt, a federal appeals judge, have led to a call for action by dozens of his former law clerks. Seventy-two former Reinhardt clerks signed an open letter seeking new procedures for reporting workplace misconduct by judges and supervisors, as well as improved training on sexual harassment.

The letter also said protections against discrimination in Title VII of the Civil Rights Act of 1964 should be extended to the judicial branch. “There is no justification for a system in which antidiscrimination law applies to all except those who interpret and enforce it,” the Feb. 20 letter said.

The signers represent more than half the lawyers who clerked for Reinhardt, who was known for his liberal rulings on gender equality, civil rights and labor rights for the 9th U.S. Circuit Court of Appeals at San Francisco. Law360 and Bloomberg Law have coverage.

Former Reinhardt clerk Olivia Warren had alleged in Feb. 13 congressional testimony that the judge sexually harassed her. Warren said Reinhardt had commented on the appearance of women, made remarks about her sexual relationship with her husband, and said women lied about sexual harassment.

Warren said Reinhardt had expressed surprise that Warren was married because, in his judgment, no man would find her attractive. He speculated that Warren’s husband must be a “wimp” or gay, Warren said.

Reinhardt died in March 2018 at age 87, during Warren’s clerkship.

The letter said some of the clerks signing the letter “experienced or witnessed conduct in chambers that we would call sexist, workplace bullying or mistreatment. Others did not. Most of us were as shocked as the rest of the world to learn of the clerk’s experience in Judge Reinhardt’s final year.

“All of us, whatever our personal experience, are united that no clerk should have to go through this kind of ordeal, and that it is important to stand with those who speak out about it.”

One of the former law clerks, Michele Landis Dauber, told Law360 that she was the only mother Reinhardt had ever hired, and he regretted the decision because she “could not work long hours six days a week.”

“He frequently announced that it was a terrible mistake to hire me, and that he would never hire another mother, which he never did, although he did hire at least one father,” she said.