Lawyer is accused of climbing down wall, entering Capitol during Jan. 6 riot 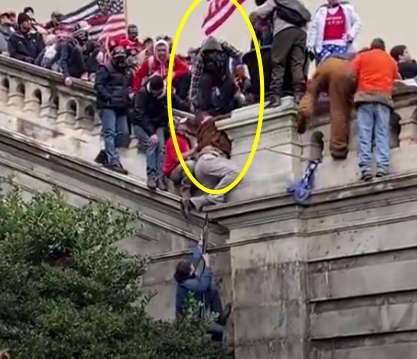 Indianapolis lawyer Quentin G. Cantrell appears to try to climb down a wall on the west terrace of the U.S. Capitol as Eric Andrew Cantrell reaches down to help him during the Jan. 6, 2021, riot. Image from the statement of facts.

An Indianapolis patent and trademark attorney has been charged with entering the U.S. Capitol and engaging in disorderly conduct during the Jan. 6, 2021, riot.

Lawyer Quentin G. Cantrell was arrested last week, along with two of his cousins, Jared Paul Cantrell and Eric Andrew Cantrell, according to the Indiana Lawyer.

Photos and videos showed Quentin Cantrell entering the Capitol, staying there briefly, and climbing down a terrace wall, according to a statement of facts by an FBI task force officer filed in federal court in Washington, D.C.

Indiana attorney records list Quentin Cantrell’s employer as the intellectual property law firm Woodard, Emhardt, Henry, Reeves & Wagner, based in Indianapolis. According to the Indiana Lawyer, he was listed on the firm’s website as of counsel last Thursday, the day of his arrest. By Friday morning, his name was gone.

The statement of facts said Quentin Cantrell was identified on closed-circuit TV in the Capitol, from other videos in and around the Capitol, and from photos posted on Instagram by Jared Paul Cantrell.

Screenshots of closed-circuit television show the Cantrells entering the Capitol through an open upper west terrace door, the statement of facts said. Another screen hot shows Quentin Cantrell and Eric Andrew Cantrell exiting the Capitol about two minutes after they entered.

In one open-source video, Quentin Cantrell appears to try to climb down a wall on the west terrace of the Capitol as Eric Andrew Cantrell reaches down to help him, according to the statement of facts.

On Facebook, Jared Paul Cantrell allegedly wrote Jan. 6, 2021, that he was “one of the first 50 in” and “forceful entrance,” according to the statement of facts.

He later walked back those comments, though, saying he “didn’t go over any barricades or push through any police,” and he was only there “for a total of four minutes.” He also said he saw officers in riot gear standing to the side, and he thought that officers were letting people in the Capitol easily so they could be trapped inside.