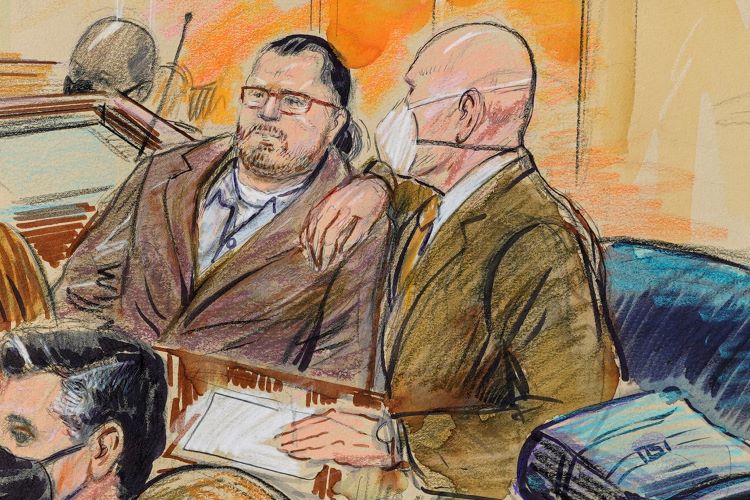 This artist sketch depicts Guy Reffitt (left), joined by his lawyer William Welch III, in federal court in Washington, D.C., on Feb. 28. Reffitt was convicted March 8 of storming the U.S. Capitol with a holstered handgun. Illustration by Dana Verkouteren via the Associated Press. Image from Shutterstock.

Federal jurors in Washington, D.C., convicted a Texas man Tuesday for participating in the Jan. 6, 2021, U.S. Capitol riot in the first criminal trial stemming from the attack.

Guy Reffitt, 49, of Wylie, Texas, was convicted on all charges against him in what BuzzFeed News calls a major win for the government.

Law.com, the New York Times, the Washington Post and Politico also have coverage.

The charges were two counts of civil disorder and one count each of obstruction of an official proceeding, being in a restricted area of the Capitol with a firearm, and obstruction of justice, according to a Department of Justice press release.

Reffitt was accused of recruiting members of the Texas Three Percenters to join him Jan. 6, 2021. He allegedly led a mob up staircases outside the Capitol building but stopped before entering because he was pepper-sprayed.

At a rally before the attack, Reffitt’s helmet camera recording him saying, “We’re taking the Capitol before the day is over,” prosecutors said. Later, he narrated a video that he recorded Jan. 6 in which he said he didn’t make it inside the Capitol, “but I started the fire.”

Defense lawyer William Welch III had told jurors in closing arguments that texts and recordings of Reffitt stemmed from his tendency to brag.

“He embellishes. He exaggerates,” Welch said of his client, according to Business Insider.

Welch also suggested that video evidence could have been faked.

The two obstruction counts could bring the highest sentences. Each provides for a maximum sentence of up to 20 years in prison. Welch had claimed that his client was guilty of no more than trespassing, which carries a sentence of up to one year in prison.

The charge of obstructing an official proceeding is the most common felony charge brought against Capitol riot defendants, according to Law.com. The other charge, obstruction of justice, was based on allegations that Reffitt threatened his children so that they would keep quiet about his riot participation. He allegedly told them, “Traitors get shot.”

U.S. District Judge Dabney Friedrich of the District of Columbia had refused to dismiss the charge for obstructing an official proceeding before Reffitt’s trial. She found that preventing certification of election results qualified as an official proceeding, Law.com previously reported. Friedrich said after the verdict that she was not inclined to revisit the ruling but would review a defense motion on the issue.

Friedrich indicated that she disagreed with an analysis by U.S. District Judge Carl Nichols, also of the District of Columbia, who dismissed an obstruction of an official proceeding charge in a different Jan. 6 case Monday. Nichols had reasoned that the charge applied only to defendants who tampered with official documents or records during the attack, according to the Washington Post.

Friedrich is one of at least seven judges who have refused Capitol defendants’ requests to toss the charge for obstructing an official proceeding, according to the Washington Post. But there are seven other defendants with cases before Nichols who could win dismissal of that charge.

“Given the novel application of the law and the high stakes of the Jan. 6 probe, a certain government appeal could send the question to the U.S. Court of Appeals for the District of Columbia Circuit and eventually to the U.S. Supreme Court,” the Washington Post reports, citing the opinions of legal experts.