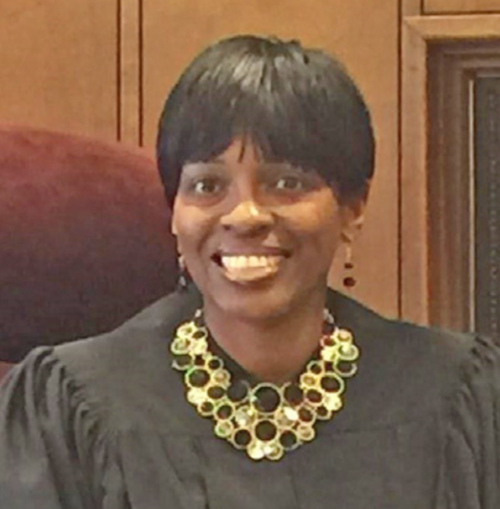 A domestic relations judge in Birmingham, Alabama, has been accused in an ethics complaint of forcing her staff to take diet pills and abusing prescription drugs herself, resulting in paranoid behavior and the belief that the Alabama Judicial Inquiry Commission is "going to kill her."

Judge Nakita Blocton of Jefferson County, Alabama, was temporarily removed from the bench with pay after she was charged in a May 14 complaint, AL.com reports. She voluntarily took leave from the bench in February.

The ethics complaint alleges that:

• Blocton abused her staff, sometimes calling them names, resulting in “an inordinate amount of turnover,” since the time she took office in 2017. She required staff to work unreasonable hours on short notice and threatened to fire them if they didn’t comply. She told one staffer to “shut the hell up” and tried to block the staffer from leaving. She also forced staff members to take the diet pill Phentermine on at least one occasion, telling them that it would help “pep” them up from working late the night before.

• Despite the long hours, Blocton showed a “pattern of inordinate delay” in issuing rulings and disposing of her caseload. Many lawyers reported that her chambers were “chaos” and “poorly supervised.”

• Blocton used prescription pills, including Phentermine, which produced behavioral changes. Sometimes she would become “hyper-talkative and hyper-somnolent in chambers and on the bench.” She also exhibited paranoid behavior, “such as talking in circles” about the same topic “for hours” and expressing a belief that the Alabama Judicial Inquiry Commission or someone acting at its direction was “going to kill her.” She also told others that fellow judges were out to get her in a political “hit job.” She consistently stayed at the courthouse overnight and has told others that she doesn’t sleep “for days at a time.”

• Blocton or someone acting on her behalf used Facebook aliases to send threatening messages to a litigant in a divorce case who filed a complaint against Blocton with the Alabama Judicial Inquiry Commission. The divorce case later moved to another judge. Among the communications is this, written in all caps: “The devil is watching U, Pam, Angela and the people behind U/U ply wit God I ply with the devil/Leave those Black women Democrats alone or the devil is going to get U.”

• Blocton sent text messages disparaging other judges to a friend who worked for Blocton for less that a week. One of the messages read: “[Judge S] is the devil. Don’t let that smiling face trick you.”

• Blocton retaliated against lawyers who called to inquire about pending orders by directing staff to put their cases on the bottom of the stack.

• Blocton engaged in ex parte communications with lawyers, telling one lawyer how to fix her filing and how she would rule if a motion to stay was filed.

• Blocton routinely kept lawyers and litigants, including children, at the courthouse or on virtual hearings late at night or for unnecessarily long hearings.

• When one lawyer sought a trial continuance for flu-related symptoms and submitted a doctor’s note, Blocton called the lawyer’s doctor from open court. Blocton discussed the lawyer’s condition and then refused to continue the hearing.

AL.com spoke with Emory Anthony, one of the lawyers representing Blocton.

Any delays were due to COVID-19 and the death’s of Blocton’s father and grandfather, Anthony said.

Anthony blamed the allegations on “disgruntled employees,” including “a young lady who took off against all of the judges in domestic relations.”

Anthony said Blocton took a drug test, which showed that she was able to be on the bench, and passed a polygraph test. The ethics complaint “is just out of left field,” Anthony said.