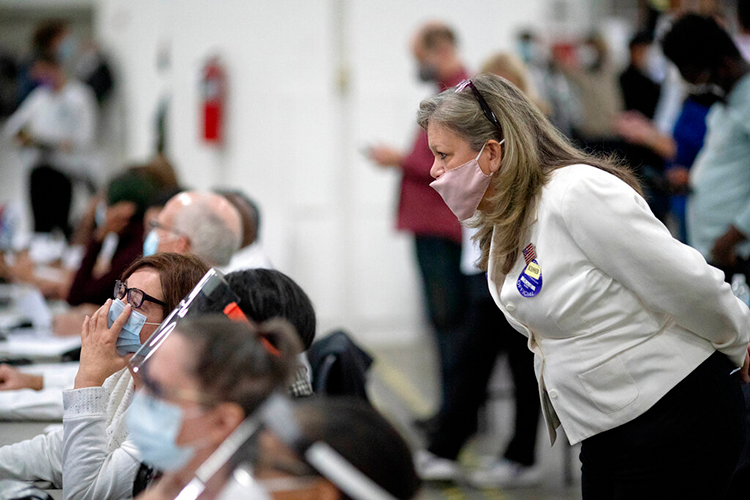 A Republican election challenger observes election inspectors at the central counting board in Detroit while ballots are counted on Nov. 4. A Michigan judge is considering sanctions for attorneys who filed a lawsuit alleging voter fraud after the election. (AP Photo/David Goldman, File)

During a more than six-hour hearing via videoconference on Monday, a federal judge grilled former campaign lawyers for President Donald Trump over a lawsuit they filed in Michigan alleging voter fraud in last fall’s election.

“I don’t think I’ve ever seen an affidavit that makes so many leaps. This is really fantastical,” Judge Linda Parker of the U.S. District Court for the Eastern District of Michigan told the lawyers, according to Reuters’ coverage of the hearing. “So my question to counsel here is: How could any of you as officers of the court present this affidavit?”

The Washington Post, Politico, Forbes and Law.com also have reports.

Parker held the hearing to determine whether Dallas-based Sidney Powell, Atlanta-based L. Lin Wood and other lawyers allied with Trump should be sanctioned for the lawsuit they filed in November that sought to overturn Democratic President Joe Biden’s victory in the election.

The judge had dismissed the lawsuit in December, writing in her decision that Powell’s claims of widespread voter fraud in Michigan were “nothing but speculation and conjecture.” According to Reuters, Michigan Attorney General Dana Nessel and other government attorneys asked the judge the following month to discipline the lawyers for filing a frivolous lawsuit full of factual errors.

“What they filed was an embarrassment to the legal profession,” David Fink, a lawyer for the city of Detroit, said at Monday’s hearing.

During her inquiry, Parker said the lawyers should have investigated Trump’s voter fraud claims more carefully before filing their lawsuit.

“Should an attorney be sanctioned for his or her failure to withdraw allegations the attorney came to know were untrue?” Parker said, according to Reuters. “Is that sanctionable behavior?”

The judge also said she thought affidavits had been submitted in “bad faith.”

Parker questioned the lawyers’ specific claims, including that thousands of new ballots had been added to the vote count in Michigan and that people were seen bringing plastic bags to the post office. According to Law.com, the plaintiffs counsel and their lawyer Donald Campbell suggested that the judge examine the sworn statements in their full context and bring in their witnesses for an evidentiary hearing.

Parker disagreed, and according to Law.com, told the lawyers that “the bottom line is, if you’re going to file an affidavit, in this court’s view, there should be a general understanding of the process.”

“If you have not asked the minimal questions—I find that a problem,” the judge also said.

Several lawyers attempted to distance themselves from the litigation during Monday’s hearing.

Wood was listed as one of seven attorneys on the lawsuit in November but told Parker he wasn’t involved in preparing it.

“I played absolutely no role in the drafting of the complaint, just to be clear,” Wood said, according to Politico. “I did not review any of the documents with respect to the complaint. My name was placed on there, but I had no involvement.”

Politico also said that Parker asked Wood whether he had given permission for his name to be included in the lawsuit.

“I do not specifically recall being asked about the Michigan complaint, but I had generally indicated to Sidney Powell that if she needed a quote-unquote trial lawyer, I would certainly be willing or available to help her,” Wood said. “Would I have objected to being included by name? I don’t believe so.”

Thomas Buchanan, a lawyer for Emily Newman, who worked in the Trump White House and faces possible sanctions, also attempted to distance her from it.

According to Politico, Buchanan said Newman “was a contract lawyer working from home who spent maybe five hours on this matter.”

In closing, Powell said she wouldn’t change anything about the litigation. According to Law.com, she said the volume of affidavits proved that the lawyers did their due diligence and that lawyers sometimes have to defend unpopular causes.

Parker asked the lawyers to file their supplemental briefs within two weeks, and according to Reuters, said she would issue her written ruling “in due course.”

ABA Journal: “Election lawyers say they can’t be sanctioned if they signed documents in typewritten form”