Meet Sidney Powell, the conspiracy-minded lawyer who vowed to 'release the kraken' in election suits 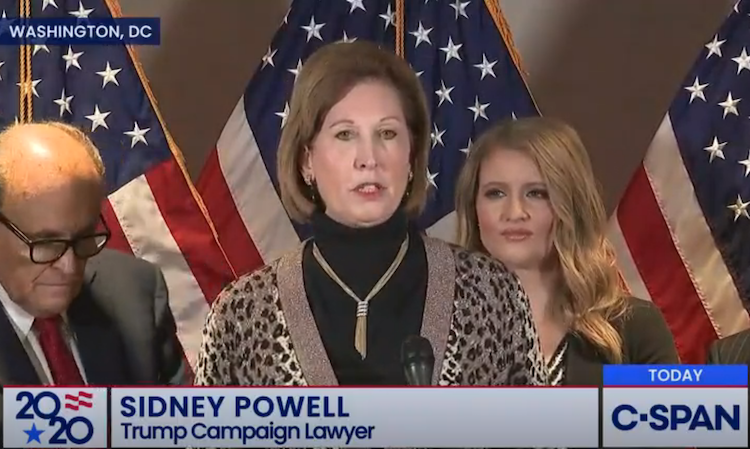 Lawyer Sidney Powell, who promised to “release the kraken” in lawsuits challenging election results, got a jump-start on her career, earning her college diploma in less than two years and becoming a federal prosecutor at a young age.

Despite her early accomplishments, her lawsuits alleging fraud in Georgia and Michigan drew derision for typos and lack of evidence to support her claims of massive election fraud, Newsweek reports.

Powell’s reference to releasing the kraken also drew notice. According to BBC News, the kraken is a sea monster in Scandinavian folklore that emerges from the sea to devour its enemies.

The suits amplified Powell’s claims at a press conference and interviews that ballot fraud was enabled by software made by Dominion Voting Systems. Powell had claimed that voting machines had been rigged, and Republican officials in Georgia were part of the scam. After her assertions, the Trump campaign distanced itself from Powell, saying she is “practicing law on her own.”

In the suits, Powell and other lawyers say Dominion and another company were founded “to ensure computerized ballot-stuffing and vote manipulation” in Venezuelan elections to help then-President Hugo Chavez win the vote. The software is able to hide its manipulation of votes from any audit, the suit claims.

According to the Washington Post, Powell’s assertions about Dominion software being used to help Chavez have been discredited.

Dominion said the allegations amount to a “bizarre election fraud conspiracy” that is “baseless, senseless, physically impossible and unsupported by any evidence whatsoever,” according to the Washington Post. In Georgia, “hand counts, independent audits and machine tests have all repeatedly affirmed that the machine counts were accurate,” the company said.

But Powell saw some early success in the Georgia suit, report Bloomberg Law and Politico.

U.S. District Judge Timothy Batten of the Northern District of Georgia on Sunday blocked officials from altering Dominion voting machine software and ordered the officials to file briefs explaining any opposition to inspections of the voting machines.

When she was growing up, Powell “became known as a young woman in a hurry,” according to a Washington Post story on her background. Powell, 65, said she was a fan of the TV show Perry Mason as a child and knew that she wanted to be a lawyer by the fourth grade.

She earned a bachelor’s degree from the University of North Carolina in 21 months “and swiftly passed through UNC’s law school,” according to the Washington Post. She became an assistant U.S. attorney in San Antonio at age 23, which made her the youngest federal prosecutor in the country, Powell has said. She formed an appellate section for the office.

After spending a decade as a prosecutor, Powell moved to the law firm Strasburger & Price, then founded her own boutique focusing on appellate litigation, with offices in Dallas and Asheville, North Carolina. At one time, she was a registered Democrat.

While in private practice, Powell co-wrote a paper regarded as a manual for explaining appellate rules.

Powell has said her view of the justice system changed as a result of a case stemming from the bankruptcy of the energy company Enron Corp., according to the Washington Post.

Powell represented a Merrill Lynch executive in a case involving the Enron Corp.’s sale of its interest in Nigerian barges to the investment bank. Powell lost two appeals in the case, the second of which concerned failure to disclose exculpatory prosecution evidence.

The 5th U.S. Circuit Court of Appeals at New Orleans ruled in the second appeal that the executive’s guilt was amply supported by the evidence, and the exculpatory information wouldn’t have made a difference, according to the Washington Post.

Powell filed ethics complaints against lawyers on the Department of Justice’s Enron Task Force, including then-FBI general counsel Andrew Weissmann. The complaint went nowhere, and Powell viewed that as an indication that the justice system needed repair.

Powell wrote a book published in 2014 called Licensed to Lie that claimed that federal prosecutors are allowed to break the law, without repercussions. The book referred to Weissmann nearly 100 times, according to the Washington Post.

Weissmann went on to oversee the fraud section of the DOJ’s criminal division. He was also a member of former special counsel Robert Mueller’s team investigating Russian interference in the 2016 election.

Weissmann wrote his own book about the probe that claimed that Mueller’s office failed to fully investigate Trump’s financial ties amid fears that Trump would shut down the investigation.

Powell criticized the Mueller probe in interviews, alleging in one appearance that Weissmann is among “a corrupt cabal of former prosecutors.”

Powell went on to represent former national security adviser Michael Flynn, who pleaded guilty to lying to the FBI in the Mueller probe. After Powell began representing Flynn, he sought to withdraw the plea.