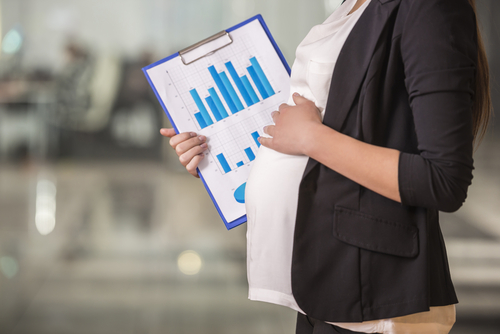 A Chicago immigration lawyer has been awarded $229,498 in her suit claiming that she was fired from her job at a law firm after disclosing her pregnancy.

Pallmeyer said in a Feb. 7 hearing that the Katz Law Office had “ducked service” of the lawsuit for 90 days, and then its production of emails in discovery was “patently incomplete.” The transcript is here.

“There has been ample opportunity to get the discovery done,” Pallmeyer said. “And the foot-dragging really has been on the part of the defendant. This is no longer acceptable.” Pallmeyer entered the default judgment at the hearing.

Hernandez said she disclosed her plans for maternity leave in May 2016 to name partner Matthew Katz, according to earlier coverage by Law360. He suggested that she change to a contract attorney position after giving birth and reapply for a full-time position after her leave, according to Hernandez’s complaint.

Hernandez rejected the idea because she wanted to stay in her full-time salaried position. She was fired the same day. Hernandez alleged violation of Title VII of the Civil Rights Act of 1964.

Hernandez’s Feb. 6 motion, filed by her lawyer Kate Sedey, said the Katz Law Office “has engaged in an ongoing pattern of delay.”

“It has now been almost three years since plaintiff’s termination and nearly a year and a half since she filed suit,” the motion said. “Despite that, the parties have not even completed written discovery, let alone taken a deposition.”

During the Feb. 7 hearing, the lawyer for the Katz Law Office, Mario Utreras, told Pallmeyer that he thought that Hernandez’s motion for default judgment was “very improper, and I think it’s using a shotgun to kill some—to resolve a problem that could have been easily resolved with a quick reminder email or a phone call.”

Utreras said some progress had been made in discovery, and he and his client “have made every effort” to be cooperative. He also said Hernandez’s lawyer had twice canceled depositions, so some of the delays were attributable to her.

Pallmeyer said Hernandez’s lawyer did send reminder emails and phone calls. She also noted Utreras’ mention of a shotgun approach. “The people upstairs do not think I am trigger-happy,” she said in an apparent reference to the 7th U.S. Circuit Court of Appeals at Chicago.

The Illinois Attorney Registration & Disciplinary Commission lists Matthew Katz as retired from law practice. Katz’s lawyer did not immediately respond to a request for comment.