Lawyers 'lean to the left,' study says; which schools, firms and practice areas are most liberal? 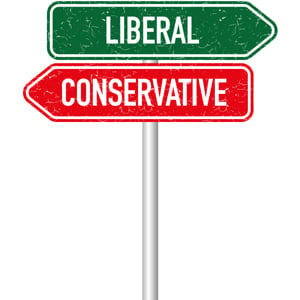 Many conservative commentators have aired claims that trial lawyers appear more liberal than the rest of the population, and they overwhelmingly contribute to Democratic candidates.

Is it true? And is the legal profession on the whole left-leaning? A study by professors from Harvard, Stanford and the University of Chicago Law School says the answer is yes. “American lawyers lean to the left of the ideological spectrum,” the authors say in an article noted by TaxProf Blog (here and here) and the Witnesseth blog.

The most liberal practice area is entertainment law, followed by civil rights and then personal injury, the study found. After that, the most liberal areas are elder law, class action law and medical malpractice.

The study linked lawyer listings in the Martindale-Hubbell Legal Directory with information on individuals’ federal campaign contributions contained in the Database on Ideology, Money in Politics, and Elections.

Though lawyers are more liberal than the entire population of individual donors, there is a slight modality to the distribution. On a graph, there is a peak of lawyers around the center left, and a second, smaller peak in the center right. “In other words,” the authors say, “the ideology of American lawyers peaks around Bill Clinton on the left and around Mitt Romney on the right.”

Few lawyers, however, are at the far ends of the spectrum, and relatively few lawyers are right in the middle of the distribution.

Though liberal, the legal profession’s liberal leanings are eclipsed by members of at least three other professional groups. Out of seven professional groups studied, the most liberal consisted of technology workers, followed by journalists, academics, lawyers, accountants, bankers and financial workers, and medical doctors.

4) University of California at Berkeley

5) University of California at Hastings

The five law schools with the most conservative graduates are:

The study also looked at 350 law firms that have the most lawyers in the study database, and found that these are the most liberal based on their lawyers’ donations:

The firms in the database with the highest conservative scores are:

The study will be published in the Journal of Legal Analysis. The authors are Adam Bonica of Stanford, Adam Chilton of the University of Chicago Law School, and Maya Sen of Harvard.

ABAJournal.com: “Lawyers are more liberal than general population, study finds; what about judges?”