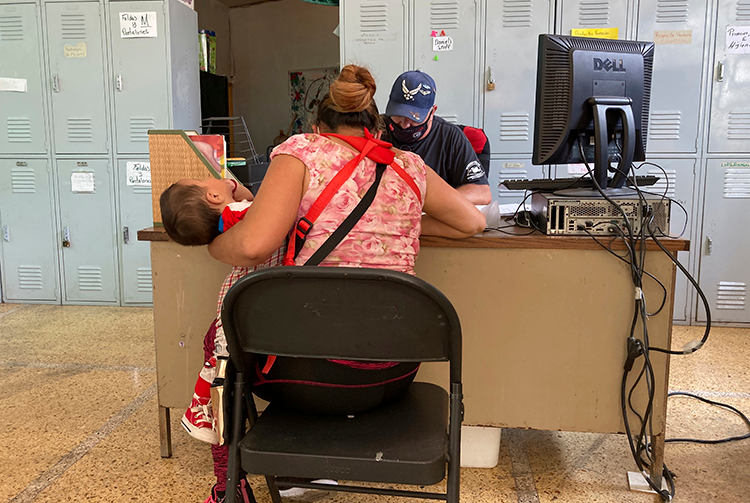 Silvia Portillo of Honduras is interviewed by Robert Vivar of the Unified U.S. Deported Veterans Resource Center in Mexico in July. Asylum-seekers like Portillo are having to navigate a murky and backlogged asylum system. Photo by Elliot Spagat/The Associated Press.

The House of Delegates overwhelmingly passed a pair of resolutions that urge the Biden administration to help increase transparency and fairness in the nation's immigration and asylum systems during the ABA Midyear Meeting on Monday.

Resolution 609 asks the federal government to provide access to the asylum process to all those seeking protection from persecution or torture that “affords them transparency, due process, access to counsel, and a full and fair adjudication that comports with U.S. and international law.”

The resolution also urges the executive branch to stop using Section 265 of Title 42 of the U.S. Code to block asylum-seekers at the southern border, expel them from the United States and expose them to danger by returning them to Mexico or their home countries.

“Over the past couple of years, we have seen disparate images of noncitizens at the southern border waiting to apply for asylum, waiting in makeshift, unsafe refugee camps in Mexico,” said Karla McKanders, chair of the Commission on Immigration, who moved the resolution. “We have witnessed images from the media of mass deportation sites sending noncitizens back to their countries of origin.

“Last fall, we witnessed the horrific images of Haitians at the Del Rio border summarily deported, some of them afraid to return to a country where their president was recently assassinated.” 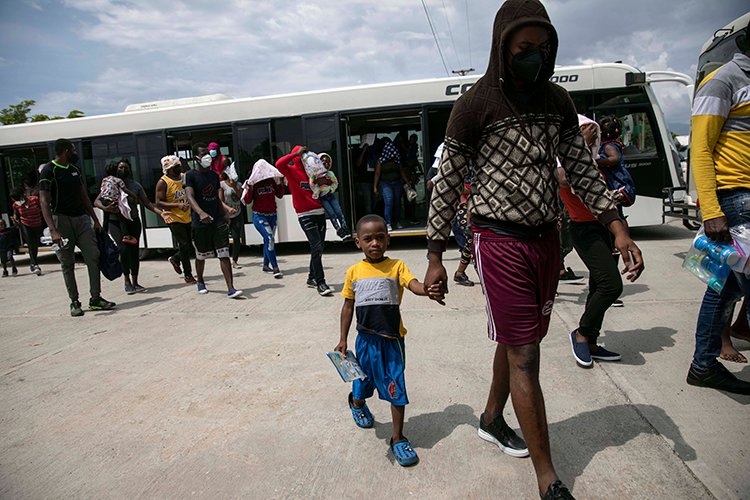 Haitians who were deported from the United States in September arrive at the Toussaint Louverture International Airport, in Port au Prince, Haiti. (AP Photo/Rodrigo Abd)

The Trump administration announced in March 2020 that it would use Title 42 to close U.S. ports of entry to many noncitizens, including asylum-seekers, because of the COVID-19 pandemic. According to Title 42, the director of the Centers for Disease Control and Prevention may prevent people from entering the United States when he or she determines there is a serious danger of them bringing a communicable disease into the country.

The Biden administration has continued the use of Title 42, although it now exempts unaccompanied children from expulsion. According to data from U.S. Customs and Border Protection, which is cited in the report accompanying the resolution, agents used the policy to turn more than 100,000 people away from the southern border in the month of September alone.

CBP also shows that in all of fiscal year 2021, Title 42 was used to prevent more than 1 million people from crossing into the United States from Mexico.

McKanders added that both high-level health officials and politicians have condemned the use of Title 42 at the southern border.

In May, United Nations High Commissioner for Refugees Filippo Grandi implored the United States “to swiftly lift the public health-related asylum restrictions that remain in effect at the border and to restore access to asylum for the people whose lives depend on it, in line with international legal and human rights obligations.”

Challenges over Title 42 expulsions of asylum-seekers have also come from within the United States. The American Civil Liberties Union and other immigrants’ rights advocates filed one of the lawsuits that seeks an immediate end to the policy. In September, a federal district court held that Title 42 expulsions are likely unlawful, but the Biden administration has appealed the ruling.

Also in September, ABA President Reginald Turner urged the federal government “to uphold the rule of law in the treatment of Haitian and other migrants, while it works to protect the health and security of our southern border.”

Resolution 610 calls on the Department of Homeland Security, Department of Justice and Department of Health and Human Services to eliminate “actual and perceived racial bias, discrimination and xenophobia in the enforcement of the Immigration and Nationality Act.”

To accomplish this goal, it encourages the agencies to use data collection, analysis and other measures to prevent racial bias and ethnic profiling in their decision-making; incorporate anti-racism policies in hiring and other personnel matters; and create standards to ensure they thoroughly review and respond to reports of discrimination.

McKanders also spoke in favor of this resolution, pointing out that the ABA has long condemned the racism that has permeated laws in the United States.

“Strategies to overcome the history of racism within immigration enforcement must be systemic, race-explicit and outcome-oriented if they are to succeed,” she said. “An effective strategy to change the immigration system must balance between eradicating the systemic effects of racism while also exposing the foundations and root causes.”

The report accompanying the resolution cites several examples that demonstrate how immigrants from Latin America and Africa have been harmed by the intersection of racial bias and immigration enforcement.

The New York University School of Law Immigrant Rights Clinic and Black Alliance for Just Immigration show in their joint 2016 report that Black immigrants made up 10.6% of all immigrants in removal proceedings between 2003 and 2015, even though they only comprised 5.4% of the unauthorized population and 7.2% of the noncitizen population in the United States during that period.

The NAACP Legal Defense and Educational Fund filed a federal lawsuit in 2018 alleging that DHS’ decision to rescind the Temporary Protective Status designation for Haitian immigrants discriminates against immigrants of color.

And in October, several civil rights organizations filed a Freedom of Information Act lawsuit over the U.S. government’s deportation of asylum-seekers to Cameroon, where a civil war has displaced nearly 700,000 people.

Resolution 610 further urges the creation of an interagency Immigration Racial Task Force with representatives from DHS, DOJ and HHS that can study the prevalence of racial disparities in all stages of immigration enforcement; issue regular public progress reports and make recommendations about how to end systemic racial discrimination.

The Commission on Immigration and Section of Civil Rights and Social Justice sponsored both of these resolutions.

Updated on Feb. 16 to clarify language around Resolution 609.