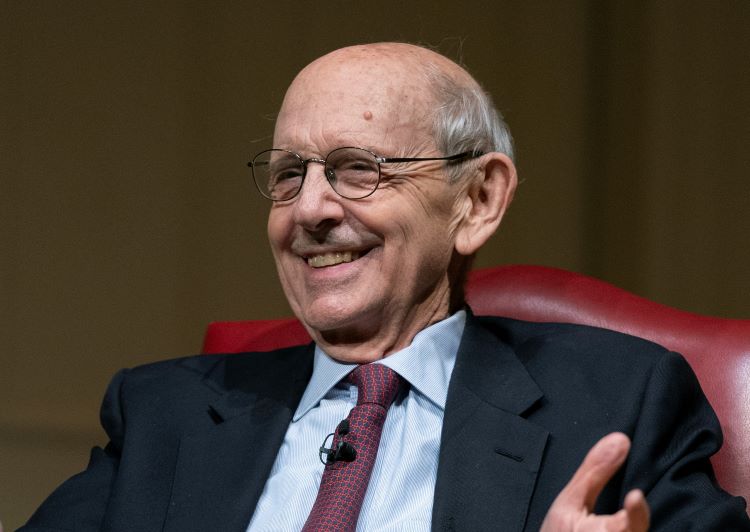 Retiring Supreme Court Justice Stephen Breyer speaks during an event at the Library of Congress for the 2022 Supreme Court Fellows Program in February. Photo by Evan Vucci/The Associated Press.

U.S. Supreme Court Justice Stephen Breyer "has had an extraordinary career as a public servant, a defender of the rule of law, a promoter of judicial independence and a friend to the ABA," the ABA said Tuesday, in announcing that the longtime jurist will receive the 2022 ABA Medal.

“We could not find a more deserving recipient of our association’s highest honor, the ABA Medal,” ABA President Reginald Turner said in the news release. “Justice Breyer is a giant in the legal world who has dedicated nearly 50 years of his career to public service. His support of the ABA, coupled with his commitment to the rule of law and his profound contributions to making our democracy function fairly, is truly inspiring.”

Breyer, who plans to retire from the Supreme Court in July, will be replaced by Judge Ketanji Brown Jackson. Breyer has written more than 525 opinions since his appointment in 1994 by then-President Bill Clinton. He graduated from Harvard Law School, where he worked as a professor and was credited by several scholars with making the field of administrative law more pragmatic. He later served as chief judge of the 1st U.S. Circuit Court of Appeals at Boston.

An ABA member since 1988, Breyer was actively involved in the Section of Administrative Law & Regulatory Practice before joining the Supreme Court. After his appointment, he delivered a keynote address at the 2002 ABA Annual Meeting and joined fellow Justice Sandra Day O’Connor to discuss civic literacy at the 2011 ABA Annual Meeting. He also spoke virtually to the ABA General Assembly in 2020 and to the Section of International Law at its annual meeting in 2021.

Breyer will accept the ABA Medal—which, according to the association, is bestowed upon a lawyer for “exceptionally distinguished service … to the cause of American jurisprudence”—at the 2022 ABA Annual Meeting in Chicago in August.

ABAJournal.com: “Chemerinsky: Justice Breyer is a model for all who sit on a judicial bench”