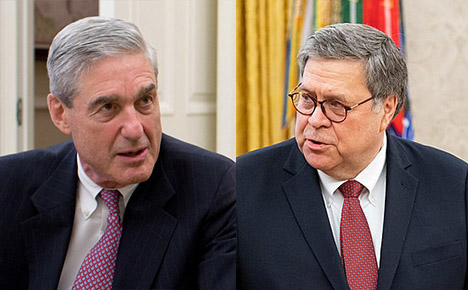 U.S. Attorney General William Barr said at a press conference Thursday that President Donald Trump did not exert executive privilege to withhold parts of special counsel Robert Mueller’s report, nor did the president or his own lawyers make any redactions.

Barr emphasized that the report found no collusion with the Russian government by Trump, by anyone associated with his campaign, or by any American.

Although Mueller found that Russia did attempt to interfere in the presidential election, Trump’s assertions on collusion were correct, Barr said. “As he said in the beginning, there was, in fact, no collusion.”

During his press conference, Barr addressed why he and Deputy Attorney General Rod Rosenstein concluded there was insufficient evidence to establish that Trump obstructed the special counsel investigation.

Barr said their conclusion was based on Mueller’s examination of 10 instances of possible obstruction. Barr also said the evaluation used the special counsel’s legal framework for obstruction, although he disagreed with it.

Barr had written an unsolicited memo to the Justice Department in June 2018, well before he became attorney general, which had argued that Mueller appeared to be proposing “an unprecedented expansion of obstruction laws.” Barr’s memo said obstruction laws don’t criminalize just any act that can influence a proceeding. Rather, they generally target actions that compromise the integrity of judges or juries, or that impair evidence.

In assessing Trump’s actions, it is important to keep in mind the context, Barr said. Trump was faced with a unique situation. Federal agents were scrutinizing his conduct before and after taking office. At the same time, there was “relentless speculation” in the news media about whether Trump was culpable in collusion.

Trump was frustrated and angry that his presidency was being undermined by a special counsel investigation he thought to be fueled by opponents and illegal leaks, Barr said. His actions must be evaluated based on the situation, Barr concluded.

Mueller also determined that Russian-affiliated hackers disseminated documents stolen from Democrats and the Hillary Clinton campaign. Then the hackers transferred some of the documents to WikiLeaks, which published a series of document dumps.

Political consultant Roger Stone, an adviser to Trump, has been accused in a special counsel indictment of making false statements about his interactions regarding WikiLeaks’ release of hacked emails.

Because Trump voluntarily cooperated with the special counsel, it would have been his right to assert the privilege, Barr said.

Mueller submitted his report to Barr on March 22. A few days later, Barr released a four-page letter summarizing the “principal conclusions” of the report, which is nearly 400 pages in length not including tables and appendices.

Barr said in his letter that the report found that there was no conspiracy with the Russian government to influence the 2016 presidential election by the Trump campaign or anyone associated with it.

He also said Mueller did not draw a conclusion as to whether Trump’s conduct constituted obstruction of justice. But Barr said he and Rosenstein thought that evidence in the report was insufficient to establish obstruction.

Mueller, a former FBI director, was named special counsel in May 2017. Rosenstein made the appointment after then-Attorney General Jeff Sessions recused himself.

Rosenstein’s grant of authority to Mueller had authorized him to investigate any links or coordination between the Russian government and individuals associated with Trump’s presidential campaign. Rosenstein also allowed investigation of “any matters that arose or may arise directly from the investigation.”

The Mueller investigation has produced “500 search warrants, 2,300 subpoenas and a string of indictments,” the New York Times reports. Mueller has indicted or obtained guilty pleas from 34 people and three companies, according to Vox and Time.

Among those indicted in Mueller’s investigation are Trump’s former campaign chairman, Paul Manafort, and his former lawyer, Michael Cohen.

Although no campaign officials were charged with Russian collusion, several indictments accuse Russian nationals of trying to influence the U.S. election. Among those indicted are 12 Russian military intelligence officers accused of hacking Democratic emails. Another indictment charged 13 Russian nationals and three Russian groups of using “information warfare” to sow discord and influence the election, partly by creating fake personas on social media.

Barr said in advance of the report’s release that he planned to use color-coding and notes to explain redactions. He said four categories of information could be redacted:

• Material that can compromise sensitive sources and methods;

• Information that could affect ongoing matters;

• And material that could affect the privacy and reputations of peripheral third parties.