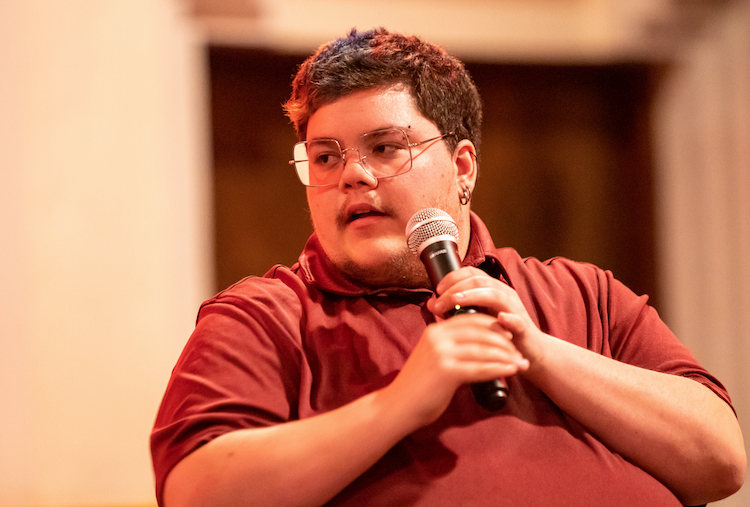 Gavin Grimm speaks on a panel in 2020 at the National LGBTQ Center for the Arts in San Francisco. Photo by Pax Ahimsa Gethen via Wikimedia Commons.

The U.S. Supreme Court has let stand a ruling that a Virginia school board violated the constitutional rights of Gavin Grimm, a transgender man and a former high school student, when it barred him from using the bathroom that matched his gender identity.

The Supreme Court denied certiorari in the case Monday, report CNN, the Washington Post and press releases by the Human Rights Campaign and the American Civil Liberties Union.

Justices Clarence Thomas and Samuel A. Alito Jr. would have heard the case.

The 4th U.S. Circuit Court of Appeals at Richmond, Virginia, had ruled in August 2020 that the Gloucester County, Virginia, school board violated Grimm’s equal protection rights and Title IX of the U.S. Education Amendments of 1972.

Title IX prevents discrimination by schools “on the basis of sex.” In interpreting the phrase, the 4th Circuit cited the Supreme Court’s June 2020 decision, Bostock v. Clayton County, which held that the ban on sex discrimination in Title VII of the Civil Rights Act protects gay and transgender workers.

The ACLU press release outlines the history of Grimm’s case. The Supreme Court had agreed to hear Grimm’s case at an earlier stage of the litigation but sent the case back to the lower courts after the Trump administration rescinded guidance that directed schools to let transgender students choose which bathrooms they would use.

Since then, three federal appeals courts have ruled that restroom policies like the one in Grimm’s case violate Title IX and the Constitution, the ACLU said. Two other appeals courts have rejected claims that allowing transgender students to use the restrooms of their choice infringes on the privacy rights of others.

Josh Block, senior staff attorney with the American Civil Liberties Union LGBTQ & HIV Project, said in the ACLU press release the Supreme Court’s decision to deny cert in Grimm’s case is “an incredible victory for Gavin and for transgender students around the country.”

“This is the third time in recent years that the Supreme Court has allowed appeals court decisions in support of transgender students to stand,” Block said. “Our work is not yet done, and the ACLU is continuing to fight against anti-trans laws targeting trans youth in states around the country.”

Grimm also issued a statement that was released by the ACLU.

“I am glad that my yearslong fight to have my school see me for who I am is over,” he said. “Being forced to use the nurse’s room, a private bathroom and the girl’s room was humiliating for me, and having to go to out-of-the-way bathrooms severely interfered with my education. Trans youth deserve to use the bathroom in peace without being humiliated and stigmatized by their own school boards and elected officials.”