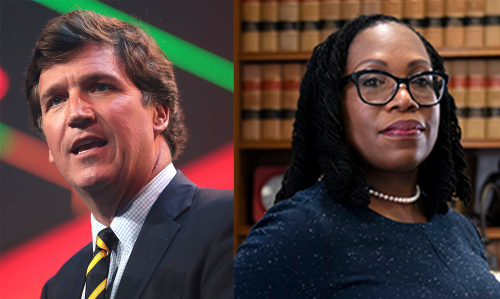 The Washington Post has the quote from Carlson, make during his Fox News program last Wednesday: “So is Ketanji Brown Jackson, a name that even Joe Biden has trouble pronouncing, one of the top legal minds in the entire country? We certainly hope so, it’s Biden’s right, appointing her is his one of his gravest constitutional duties. So it might be time for Joe Biden to let us know what Ketanji Brown Jackson’s LSAT score was. Wonder how she did on the LSATs, why won’t he tell us that?”

The Washington Post, in an article by columnist Paul Waldman, pointed out that there were no calls for the LSAT scores of prior nominees Judges Brett M. Kavanaugh, Amy Coney Barrett or Neil M. Gorsuch.

“That those justices were perfectly smart was the default assumption, something that wasn’t even worth wondering about. Why, just look at them!” Waldman wrote.

“This is something almost every person of color in politics faces sooner or later, no matter how brilliant and accomplished they are,” Waldman continued. “Conservatives will claim that they’re unqualified and dumb, and that their markers of success, such as being editor of the Harvard Law Review (which Jackson was) or clerking on the Supreme Court (which Jackson did) are in fact not markers of success at all. Instead, they’re proof of special and undeserved treatment due to race.”

At Above the Law, assistant editor Chris Williams called Carlson’s call for the LSAT score “the judicial version of birtherism” and “goal post shifting.”

Many pointed to Jackson’s credentials.

“While Jackson’s LSATs may not be public knowledge (her kindergarten report cards have also not been released to the American people), her qualifications are impeccable,” wrote columnist Arwa Mahdawi for the Guardian.

“She went to Harvard Law School; served as a supervising editor for the Harvard Law Review; clerked for three judges, including Justice [Stephen G.] Breyer; spent 15 years as a public defender; eight years as a trial court judge in the U.S. district court in D.C.; was vice chair of the U.S. Sentencing Commission; and has issued a number of notable rulings. But none of that’s good enough for Carlson. He will not rest until we see her LSATs, a flawed measure of student potential that helps candidates get into law school but has zero to say about their ability after they graduate,” Mahdawi wrote.

At the New York Times, opinion columnist Charles M. Blow said the demand for Jackson’s LSAT score is “humiliating and degrading.” And it’s no surprise, he wrote.

“One thing to which successful Black people can attest is that you are sometimes, even often, asked to prove your credentials, to demonstrate that you have earned your way and earned your position, often by far less credentialed questioners,” Blow wrote.

Senior Republican officials, meanwhile, have been developing different strategies to attack Jackson, the Washington Post reports in a separate story.

Lines of attack include suggesting that Jackson’s background as a public defender makes her soft on crime, that she won’t oppose an expansion of the Supreme Court, and that “dark money” groups that don’t disclose donors are promoting her nomination.