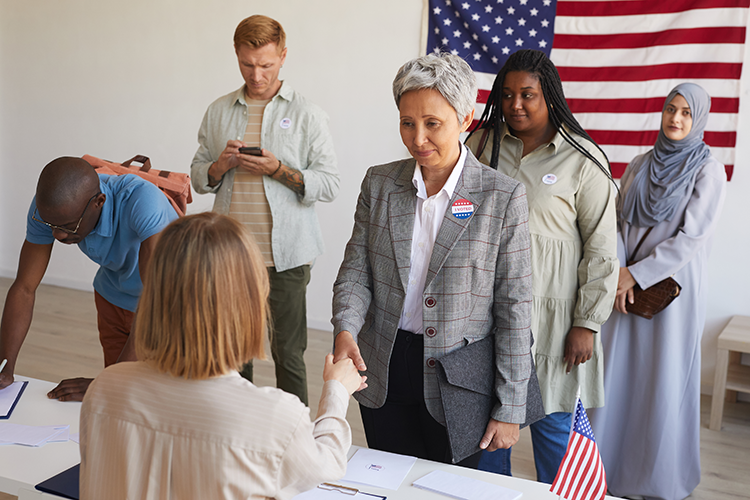 Two ABA groups have launched initiatives with the aim of strengthening election protection and the public’s trust in the electoral process.

This initiative is sponsored by the Task Force on Fair Elections and Voting Rights, part of the ABA Section of Civil Rights and Social Justice, according to an Oct. 27 press release.

The task force plans to match lawyers and law students with nonpartisan organizations that need voting-rights assistance before, during and after the election.

Help is sought in two areas: the right to vote and nonpartisan redistricting.

Volunteers who sign up here will be matched with groups already doing election work, according to task force leaders Cynthia A. Swann and Elizabeth M. Yang. They spoke about the initiative in an Oct. 5 “chair chat” with section chair Juan R. Thomas.

Volunteers will be matched with well-known groups, such as the Lawyers’ Committee for Civil Rights Under Law and the Brennan Center for Justice at the New York University School of Law, as well as lesser-known groups, such as the Hip Hop Caucus. Volunteers are also needed for Election Day to be at the polls or to be ready to prepare court filings.

“To be really clear, you don’t have to know anything about election law to get involved,” Yang said in the chair chat. “Really, all you need is a drive to make a difference and a passion to do that.”

And the work doesn’t end on Election Day, Yang told the ABA Journal.

“There is always an opportunity to help perfect democracy,” she says.

The task force has posted monographs on voting rights and redistricting to help lawyers who want to get involved.

The hashtag for the effort is #perfectingdemocracy.

This initiative is sponsored by the ABA Section of State and Local Government Law. Its goals are to educate the public about the importance of election workers, to promote an understanding that the average election worker is nonpartisan, to promote public trust in the electoral process, and to ensure adequate protection and a sense of security for election workers.

“I think a good way to instill integrity in the process is to shine a light on what happens,” says Yang, who is also involved in Defending Democracy.

Initiative members are learning more about the vote-count process, beginning with tours in Chicago and Multnomah County, Oregon. They are also planning a book, tentatively titled Voices of Democracy, to share the voices of election administrators, poll workers and others.