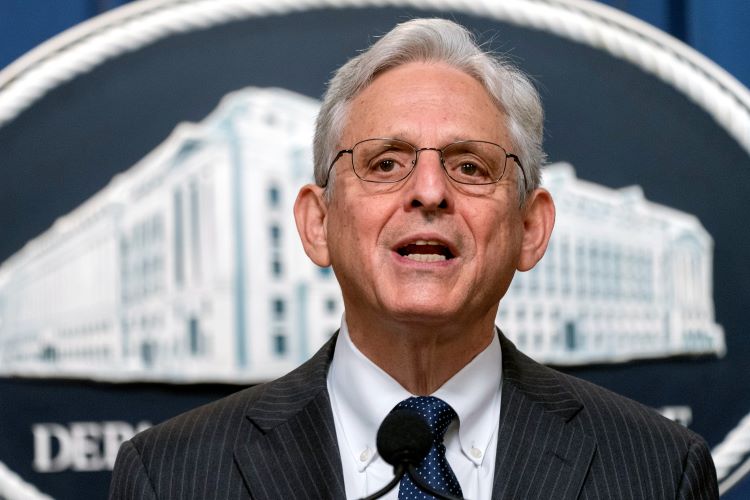 U.S. Attorney General Merrick Garland speaks during a news conference at the Department of Justice in June. Photo by Jacquelyn Martin/The Associated Press.

But Garland did say his department pursues justice “without fear or favor,” report NBC News, CNN and USA Today.

“We intend to hold everyone, anyone, who was criminally responsible for the events surrounding Jan. 6, for any attempt to interfere with the lawful transfer of power from one administration to another, accountable. That’s what we do,” Garland said.

Garland spoke with Holt on the same day that the Washington Post and the New York Times published reports that federal prosecutors have asked grand jury witnesses about Trump’s efforts to overturn the 2020 presidential election results. The reports are based on anonymous sources.

The Washington Post said prosecutors “asked hours of detailed questions” about meetings led by Trump after his election defeat, his attempt to sway former Vice President Mike Pence to overturn the election, and Trump’s instructions on naming fake electors in battleground states.

“Some of the questions focused directly on the extent of Trump’s involvement in the fake-elector effort led by his outside lawyers, including John Eastman and Rudy Giuliani,” the Washington Post reports.

The Department of Justice also reportedly received phone records of key officials and aides in the Trump administration in April, according to the Washington Post and New York Times. And the department has seized phones belonging to Eastman and Jeffrey Clark.

Eastman is a retired Chapman University law professor who advised Pence on how he could give Trump an election win. Clark is a former DOJ lawyer involved in efforts to overturn the election.

Two anonymous sources told the Washington Post that there are two tracks of the federal investigation. One involves seditious conspiracy and conspiracy to obstruct a government proceeding, the types of charges that are being used to prosecute people involved in the Jan. 6, 2021, U.S. Capitol riot. The other involves fraud in connection with the scheme to install fake electors or to pressure the DOJ to falsely claim vote fraud.