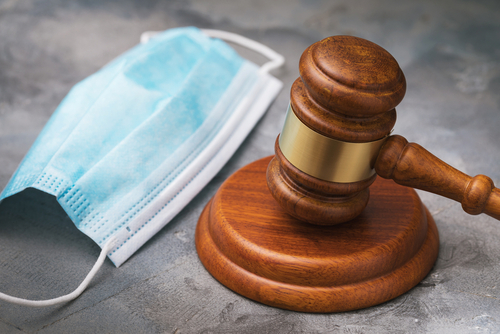 A federal appeals court on Monday ruled that children with disabilities had no standing to challenge a ban on school mask mandates in Texas because they hadn’t shown that a favorable decision would redress their injuries.

The students who sued had disabilities and underlying health conditions that carried an increased risk of serious complications if they contracted COVID-19. They claimed federal preemption under Title II of Americans with Disabilities Act, Section 504 of the Rehabilitation Act of 1973 and the American Rescue Plan Act of 2021.

The students were challenging GA-38, an executive order by Republican Texas Gov. Greg Abbott that banned school districts and other state entities from imposing mask mandates. Republican Texas Attorney General Ken Paxton had sent at least 98 letters to school districts and filed 15 lawsuits in his effort to enforce the order, according to the dissent.

A federal judge had preliminarily enjoined the mask ban and barred Paxton from enforcing the order. The appeals court granted a stay of the injunction pending appeal and expedited the case. The court ordered dismissal of the case in its July 25 decision.

The plaintiff students had sued the state attorney general and state school officials but not their school districts. That choice destroyed the case, Oldham wrote in a section of his decision joined by Willett.

“Here, plaintiffs rely wholly on speculation about the unfettered choices made by actors not before our court,” the 5th Circuit said.

“Plaintiffs chose not to sue their school districts. The school districts have the unfettered choice—with or without GA-38, and with or without any involvement by the attorney general—to drop their mask mandates at any time. And indeed they have. None of plaintiffs’ schools require masks today. And we could not enjoin those schools to impose mask mandates if we wanted to because plaintiffs did not sue them. That alone proves that plaintiffs’ claims are not redressable.”

In other parts of his opinion not joined by Willett, Oldham cited other reasons that the students hadn’t established standing. Oldham said the students’ increased risks of catching COVID-19 didn’t amount to “actual or imminent” injuries, and their risks of contracting COVID-19 and suffering complications were speculative.

In his dissent, Davis said the plaintiffs had shown that enforcement of GA-38 was the only impediment to school districts granting modifications to allow the children to attend school safely. At the time that the suit was filed and tried, the students were not eligible for vaccinations.

Davis argued that the students’ injuries were not increased risks of contracting COVID-19. Rather, the claimed injuries were disability discrimination that is prohibited by federal law.

“Plaintiffs proved that they have been, or imminently will be, injured by GA-38’s ban of mask requirements, because that ban denies them an opportunity to participate in public education—in which they have a legally protected interest—that is equal to that enjoyed by students without disabilities,” Davis said.

Davis said he would nonetheless remand the case for the judge to issue a narrower injunction that bans enforcement of the mask ban only at the plaintiffs’ seven schools.

Hat tip to Law360, Bloomberg via Yahoo and the Austin American-Statesman, which had coverage of the decision, E.T. v. Paxton.