A wrongful convictions clinic during her time at law school gave Amy Breihan a passion for civil rights work. “It’s not hyperbolic to say it changed my life.”

It’s been nearly nine years since the U.S. Supreme Court ruled in Miller v. Alabama that mandatory life without parole for juveniles violates the Eighth Amendment. It’s been five years since it held in Montgomery v. Louisiana that its 2012 decision was retroactive.

In that time, Amy Breihan has helped seek second chances for prisoners in Missouri who were younger than age 18 when they were sentenced to life behind bars. In addition to representing individual clients, she served as lead counsel in a federal class-action lawsuit that pressed the Missouri Parole Board to reform its process for juvenile lifers.

“They still hadn’t gotten it right,” says Breihan, the co-director of the St. Louis office of the Roderick & Solange MacArthur Justice Center. “I feel a responsibility as a lawyer to hold the system accountable and push them toward justice, toward equality, toward the right thing to do.”

While many states required youthful offenders serving unconstitutional sentences to be resentenced in court, she explains that Missouri changed its law. The nearly 100 individuals impacted by the Supreme Court’s Miller ruling would instead be eligible for parole after serving 25 years in prison.

The MacArthur Justice Center filed Brown v. Precythe in 2017, alleging the Missouri Parole Board had denied parole to about 90% of eligible individuals, while also preventing them from viewing their files or presenting evidence in their defense during hearings.

At direct odds with Miller, the Missouri Parole Board often neglected to consider inmates’ youth at the time of their crimes, Breihan adds. 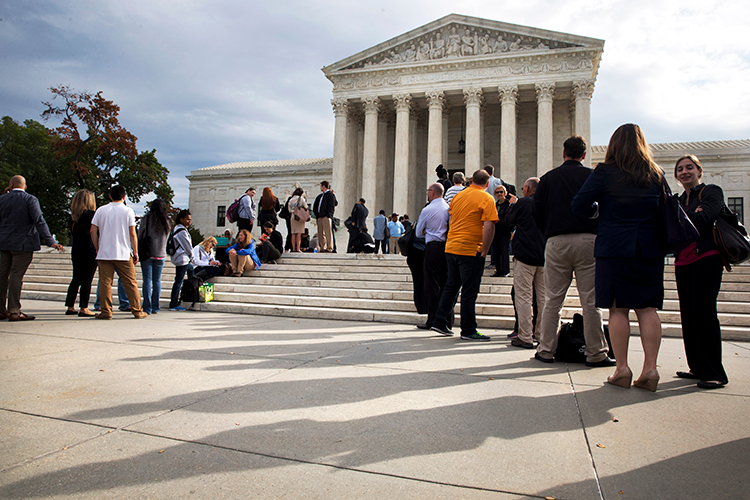 Crowds gathered outside the U.S. Supreme Court Building on Oct. 13, 2015, when the justices were hearing arguments in Montgomery v. Louisiana about whether the Miller ruling would be made retroactive. Photo by Jacquelyn Martin/Associated Press.

“Whenever we make our case to the parole board for our clients, one of the things we talk about is, ‘Would it be a risk to let this person out of prison? Are they going to commit another crime?’ ” she says. “If you look at the statistics behind juvenile offenders who serve life sentences and get out, they are in the lowest category to reoffend.

“It’s kind of like a no-brainer if you want to reduce the prison population. These are folks you can let out who are going to live productive lives.”

In October 2018, Judge Nanette Laughrey of the U.S. District Court for the Western District of Missouri agreed with Breihan and her team, ruling that the Missouri Department of Corrections’ policies and procedures for parole review violated the constitutional rights of class members. 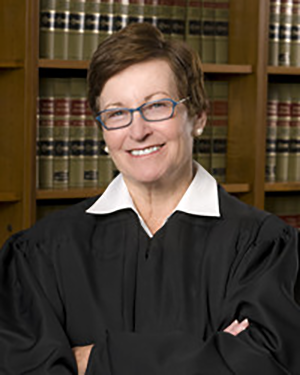 Judge Nanette K. Laughrey. Photo from the U.S. District Court for the Western District of Missouri.

Laughrey issued a declaratory and injunctive relief order the following August outlining more than 20 reforms to help improve the process for youthful offenders serving life without parole sentences. Since then, according to MacArthur Justice Center records, 27 of the 29 decisions issued by the Missouri Parole Board have been parole grants.

Breihan, who began working on the lawsuit after she joined the MacArthur Justice Center in 2016, counts several ways the reforms are benefiting her clients. In addition to allowing them to access their parole files, they can bring as many as four delegates to their hearing.

Before the court order, they were only permitted one delegate, which included their attorney.

At a recent hearing, Breihan says her client’s daughter shared how her father mentored her even though he had been incarcerated most of her life. At another hearing, her client’s sister provided more information when her brother didn’t understand a question.

“Our clients hopefully feel more comfortable because they have support in the room, but they also have people who have known them their entire lives who are incredible sources of information about how they have changed over time,” Breihan says.

She adds that the Missouri Parole Board is now required to focus on youthful offenders’ maturity and rehabilitation, rather than solely on the seriousness of their crime.

Alexa Van Brunt, the director of the MacArthur Justice Center Clinic at Northwestern University Pritzker School of Law, who has worked with Breihan for several years, describes her as “tireless.” She notes that it’s uncommon for a civil rights attorney to commit to both impact litigation and direct representation of clients.

“People in civil rights litigation land tend to gravitate toward the large-scale lawsuits, the class actions, the systemic suits, which are really important for effecting change,” she says. “But direct representation is equally important. It’s how you vindicate the rights of individual clients. It’s how you make sure change is being effectuated on the ground.

“Amy does both, and she does both incredibly effectively.”

As Breihan continues to represent her clients at parole hearings, she has also turned her attention to the 8th U.S. Circuit Court of Appeals at St. Louis, where an appeal of Laughrey’s court order and decision is pending. Her team filed a cross-appeal in the case, and she argued on behalf of class members in November.

They are now awaiting the appellate court’s decision.

Breihan, who grew up in rural Wisconsin, didn’t know any lawyers or what area of law she wanted to practice when she went to Northwestern University’s Pritzker School of Law.

But then she discovered the Bluhm Legal Clinic’s Center on Wrongful Convictions, where she helped represent clients in post-conviction innocence cases.

“It’s not hyperbolic to say it changed my life,” Breihan says. “It really opened my eyes to the incredible inequities in the criminal legal system and the harm it can do to people. It was my first time going to a prison or to a jail, and it really instilled in me a strong passion for civil rights work, for social justice advocacy.”

Breihan graduated in 2010 and started working on juvenile life without parole cases as an attorney at Bryan Cave Leighton Paisner. She still represents some of the same clients, most of whom were 16 or 17 at the time of their crimes and are now in their 40s.

When asked which clients are most memorable, she says they all stand out for different reasons. Some are involved in restorative justice and mentoring, while others serve as hospice workers and running coaches.

“There is a high incidence among these folks of childhood trauma, either being abused or witnessing abuse or violence in their community,” Breihan says. “They just have heartbreaking stories. And yet, they are incredible people. They are really important parts of their community, both in prison and outside of prison.”

She has been a member of the ABA since she joined the profession, and in November was awarded the Criminal Justice Section’s Livingston Hall Juvenile Justice Award. The annual recognition is given to an attorney who devotes “a significant portion of his or her legal practice to youth and children and is making positive contributions to the field both in and outside the courtroom.”

For Breihan, her work is personal. She believes in redemption and wants to help people who committed crimes as teenagers get out of prison, especially if they can be released without risking harm to others.

“This is digging deep into my soul, but I think of ‘tikkun olam,’ which is this Jewish concept of repairing the world,” she says. “Every one of our class members in the Brown case is convicted of first-degree murder. They all committed very serious crimes, and they caused so much pain to the victim and their family, and also to the community and their families.

“But locking them up in prison for the rest of their lives does absolutely nothing to repair those wounds.”