Marisa Vaglica wasn’t sure that the Indiana bar exam would take place this summer. And if it did, she had some doubts about whether her 2017 MacBook would work.

Initially, she says, Apple told her that its laptops would not default to external webcams required to take the state bar, and the Indiana Board of Law Examiners asked Mac users whether they could borrow or buy Windows laptops for the test.

“The board of law examiners told us, ‘If you guys get to the exam and the software fails you, there’s nothing we can do about it.’ You would have to take an L,” or take a loss, says Vaglica, a 2020 graduate of the Indiana University Robert H. McKinney School of Law.

Then, after at least 10 software updates, according to Vaglica, the Indiana Supreme Court announced July 24 that the test would be postponed. On July 29, one day after the original testing date, the court published an order changing the exam to an open-book format with no remote proctoring.

It was administered Aug. 4, and Vaglica found out Sept. 8 she was part of the 74% who passed. Like others who took a bar exam during the COVID-19 pandemic this summer, she says a few habits pulled her through.

“I was just studying my face off and keeping myself super-duper organized; that always helps with anxiety,” says Vaglica, who bought every color of Sharpie pens available, as well as 75 small poster boards on Amazon. Each test topic had its own poster board, and she varied ink colors for each one.

“The way I learn is by writing and seeing it in a big font,” Vaglica says. “My dad and boyfriend said I should sell it. I might keep it; it was so much work.” 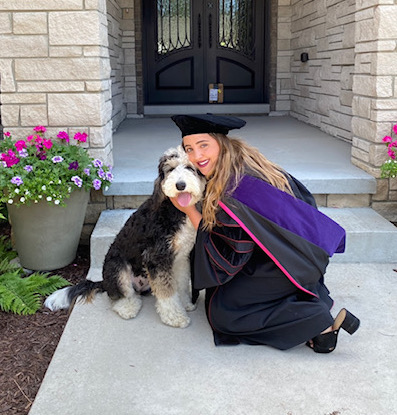 Marisa Vaglica, a 2020 graduate of the Indiana University Robert H. McKinney School of Law, and her dog Lily. “She and my mom were the only attendees to my graduation party since it happened mid-pandemic. So my mom, Lily and I celebrated together. Honestly, I think I enjoyed that more than a regular graduation,” Vaglica says.

Indiana announced in May that it would have a remotely administered, one-day bar exam, because of the COVID-19 pandemic. It was one of the first jurisdictions to announce an online exam.

Abigael Hood, a 2020 graduate of the Oklahoma City University School of Law who took and passed the state’s in-person July bar exam, knows of several people who deferred the test, including a woman who was planning to take it but had to cancel after she was infected with the coronavirus two weeks before it took place.

“All that work all summer and you don’t get to take it, that’s rough,” Hood says.

Staying focused and calm as other states canceled in-person bar exams was difficult, she adds.

“You get 10 minutes to cry sometimes. Every single day there was news about somebody getting the coronavirus, someone being shot, riots, election news,” Hood says. “Every single day it was distracting. It was hard to just unplug and not pay attention to those things.”

What worked for her was having a bar exam study partner who was a law school classmate. The two discovered as 2Ls that they did well studying together.

“I needed to find someone who would help keep me accountable,” Hood says.

They’d start their mornings going over AdaptiBar questions and then switch to BarBri. After lunch, the two walked outside while going over MBE questions.

“I heard from other people who took the bar that getting out of the house talking in the fresh air helps with memorizing things,” says Hood, who was not surprised that many of her classmates who took the Oklahoma bar in July, including her study partner, were successful.