Only Congress Can Declare War 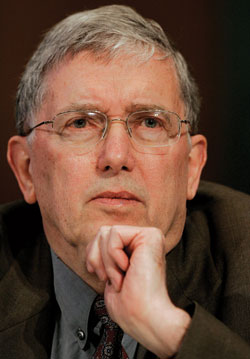 John Yoo and I agree that the framers rejected the British system of royal prerogative. In his Commentaries, William Blackstone placed all of foreign policy and the war power with the executive. Clearly the framers repudiated that model, which is obvious simply by looking at the text of the U.S. Constitution. Not a single one of Blackstone’s prerogatives—declaring war, making treaties, issuing letters of marque and reprisal, appointing ambassadors, raising and regulating fleets and armies, etc.—is vested in the president. They are either given expressly to Congress in Article I or are shared between the president and the Senate (treaties and appointments).

Where John and I differ is the scope accorded to the president over the war power. John says that “our framers decided that the president would play the leading role in matters of national security” and that the war in Libya, initiated by President Barack Obama, “rests firmly in the tradition of American foreign policy.” The record shows, however, that all major wars from 1789 to 1950 were either authorized or declared by Congress. No president during that period believed that he could unilaterally take the country from a state of peace to a state of war. It was necessary to come to Congress to seek prior approval.

Just as Truman had no authority for substituting the Security Council for Congress, so did President Obama violate the Constitution by arguing that he could obtain “authorization” from a Security Council resolution to use military force against Libya. Obama often says it is his duty to defend the country. His first duty—as reflected in the oath of office placed in Article II—is to “preserve, protect and defend the Constitution of the United States.”

Federal courts understood that principle as well. In Talbot v. Seeman (1801), Chief Justice John Marshall wrote: “The whole powers of war being, by the Constitution of the United States, vested in Congress, the acts of that body can alone be resorted to as our guides in this inquiry.” It might be argued that when the delegates at the Philadelphia Convention changed the constitutional text from “make war” to “declare war,” they limited Congress to declaring war and allowed the president to make war. That was never the understanding. The framers simply acknowledged that the president needed to “repel sudden attacks” without waiting for prior congressional authority, especially when Congress was not in session. That was a defensive, not an offensive, power. The latter judgment remained with Congress.

The fact that Congress retained authority to both declare and make war (i.e., initiate war) is clearly expressed in court rulings. A circuit court in United States v. Smith (1806) rejected the idea that a president or his assistants could unilaterally authorize military adventures against foreign governments. The court put the matter bluntly: “Does [the president] possess the power of making war? That power is exclusively vested in Congress.” If a nation invaded the United States, the president would have an obligation to resist with force. But there was a “manifest distinction” between going to war with a nation at peace and responding to an actual invasion: “In the former case, it is the exclusive province of Congress to change a state of peace into a state of war.”

It is frequently argued that the Supreme Court in the Prize Cases (1863) recognized a broad war power for the president. It did not. As with the Smith case, Justice Grier carefully limited the president’s power to defensive actions, in this case a civil war. The president “has no power to initiate or declare a war against either a foreign nation or a domestic state.” During oral argument, the attorney for the administration, Richard Henry Dana Jr., agreed that the actions of President Abraham Lincoln had nothing to do with “the right to initiate a war, as a voluntary act of sovereignty. That is vested only in Congress.”

This understanding prevailed for 160 years, from 1789 to 1950. As John notes, presidents during that period used “force abroad more than 100 times” without a declaration or authorization from Congress. But those actions, however noteworthy, did not constitute major wars. What happened in 1950 to change this constitutional pattern? Of course it was President Harry Truman unilaterally taking the country to war against North Korea. At no time did he come to Congress, as with all presidents in the past, to seek a declaration or authorization. If Congress did not authorize this war, who did? Truman claimed that two resolutions passed by the U.N. Security Council provided sufficient authority.

Here I think John and I would agree on a vital point. It is constitutionally impermissible for the president and the Senate through the treaty process to take power from future Senates and from the House of Representatives and give it to an outside body. In other words, the president and the Senate, in agreeing to the U.N. Charter, could not amend the Constitution by placing with the Security Council war powers that had rested with Congress. That is essentially the argument presented by Truman and his secretary of state, Dean Acheson. It is a shallow and empty argument. Here I would not hesitate to fault Congress for accepting that rationale and failing to protect its institutional powers. The framers expected each branch to fight off encroachments. Congress decided it was more important to fight Communism than defend the Constitution.

There were no reasons to do so. The fundamental duty of lawmakers, as reflected in their oath of office, is to support and defend the Constitution at all times. They take that obligation “freely, without any mental reservation or purpose of evasion.” There was no justification for violating the Constitution because fighting North Korea had a higher value. For more than a century and a half, lawmakers had balanced the Constitution and war powers without sacrificing one for the other.

Just as Truman had no authority for substituting the Security Council for Congress, so did President Obama violate the Constitution by arguing that he could obtain “authorization” from a Security Council resolution to use military force against Libya. Obama often says it is his duty to defend the country. His first duty—as reflected in the oath of office placed in Article II—is to “preserve, protect and defend the Constitution of the United States.” The duty of defending the country is the duty to repel attacks on the country and its forces. Libya did not attack or threaten the United States. Obama acted not in a defensive manner but offensively against another country. Any president who takes the country from a state of peace to a state of war without obtaining prior authority from Congress is creating an impeachable act. Were the president impeached by the House and removed by the Senate, the signal would be healthy and welcome for constitutional government.

John points to some qualities that the president possesses and Congress does not. He recalls what Alexander Hamilton said about unity, decisiveness, secrecy and energy residing in the president, not in the legislative branch. Generally true. John says that Congress “is too large and unwieldy to take the swift and decisive action required in wartime.” The institutional advantage here clearly rests with the president. But the framers did not give their blessing to presidential decisiveness and speed of action. They knew all too well the record of executive wars in the past, which devastated nations and left them poorer. John Jay in Federalist 4 warned that “nations in general will make war whenever they have a prospect of getting anything by it; nay, absolute monarchs will often make war when their nations are to get nothing by it,” but for purposes merely personal, such as an executive’s thirst for military glory, revenge for personal affronts and ambition. Those and other motivations lead executives “to engage in wars not sanctified by justice or the voice and interests of his people.” Because of those costs, the framers insisted that going to war be done by legislative deliberation and support.

Did the framers have a narrow, 18th century vision that has no application to America and contemporary conditions? It would be hard to make that argument after the presidential wars that followed World War II, including Korea, Vietnam and the Iraq war that began in March 2003. Korea morphed from a limited effort to protect the division between the North and the South, but changed once U.S. forces decided to go into North Korea and provoke the Chinese to enter. The result was a war that did substantial damage to the United States and certainly to the presidency of Truman. Vietnam was a great calamity, fueled in large part by the claim that a “second attack” occurred in the Gulf of Tonkin to justify U.S. retaliation. There were doubts at the time that the second attack happened. We now know that there was no second attack, but merely late signals coming from the first. The decision to go to war against Iraq in 2003 rested on a number of claims that proved false: aluminum tubes used for making nuclear weapons, “yellowcake” obtained from a nation in North Africa, mobile labs capable of carrying biological agents, drones able to deliver chemical and biological agents, etc. In every case those assertions by the Bush administration were vacuous. The record of presidents using deception and stealth to go to war would not surprise the framers. They should not surprise us.

John states that “Congress’ track record when it has opposed presidential leadership has not been a happy one.” There is some truth to that. I would not, however, fault the Senate for rejecting the Treaty of Versailles. The problem was the rigidity of President Woodrow Wilson in opposing the Lodge reservations. Wilson’s advisers urged acceptance of the reservations, but Wilson preferred to let personal animosities prevail over the treaty.

John is on stronger ground in criticizing the neutrality policy of Congress during the 1930s when fascism was sweeping Europe. Congress does not have a happy track record, but neither do many of our presidents. I would also say that Congress has done great damage to the nation and constitutional government by acquiescing to presidential wars on the mistaken belief that presidents invariably act in the “national interest” and are surrounded by officials with reliable expertise and judgment. That is a fanciful view not supported by the record. Finally, John points out that Congress possesses the power of the purse to stop wars begun by presidents. I think we all know that the spending tool is difficult to invoke when U.S. soldiers are in combat. It took nearly a decade to cut off funds for the Vietnam War.