The ABA Commission on Homelessness and Poverty was honored Monday by the U.S. Interagency Council on Homelessness for its role in providing guidance, training and technical assistance to homeless courts across the country.

The commission has been a driving force behind the movement to open homeless courts since the late 1980s. These programs help people experiencing homelessness resolve low-level misdemeanor offenses, traffic fines and warrants in exchange for working toward stability.

During the federal agency’s annual Extra Mile Recognitions ceremony, which was hosted virtually via the National Press Club, Barbara Duffield, the executive director of SchoolHouse Connection in Washington, D.C., presented the commission with the recognition for providing alternatives to criminalization.

Duffield, whose organization works to overcome homelessness through education, told the audience that she respects the commission’s “innovative, proactive and influential work,” and it “strives to prevent and end homelessness by advocating for alternatives to the criminal justice system through diversion, housing and other community-based services.” 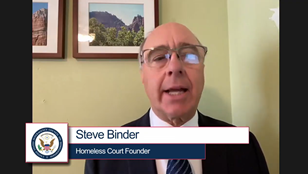 Steve Binder, a former deputy public defender who is a special adviser to the ABA Commission on Homelessness and Poverty.

Steve Binder, a former deputy public defender who is a special adviser to the Commission on Homelessness and Poverty, accepted the recognition and spoke about his experience establishing the first homeless court in San Diego.

He said he saw countless clients with citations, fines and warrants for “simple, life-sustaining acts,” such as sleeping in public. After hosting the first court at Stand Down, a three-day event that connects veterans with services and supplies, he helped expand it to monthly sessions at local shelters.

“I never imagined that today we would be recognized nationally for the replication of the model in communities across the country,” Binder said.

ABA President Patricia Lee Refo also said in a Dec. 4 news release “the foundation of the homeless court model is the simple—and now evidence-based—fact that giving defendants the opportunity to address the root causes of their behavior reduces recidivism better than continually punishing people.”

Other organizations and people honored by the U.S. Interagency Council on Homelessness included Amelia Nickerson, the CEO of First Step, which works to find jobs for people transitioning from homelessness in Atlanta; and Factory OS, which builds innovative affordable housing in northern California.