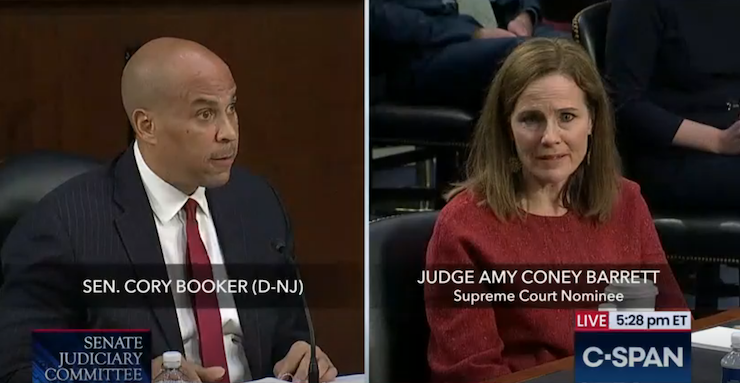 Booker began by stating that it’s not a normal time. About 10 million people have already voted throughout the nation. The COVID-19 pandemic is producing tens of thousands of new infections every day along with widespread food insecurity.

President Donald Trump has “repeatedly attacked the legitimacy of our institutions,” he said. And Trump has cast a shadow over the institution of the Supreme Court by saying he would only appoint justices who would overturn Roe v. Wade and the Affordable Care Act, Booker said.

“It seems like we are rushing through this process” of confirmation, Booker said.

Booker noted an “impassioned” open letter signed by nearly 90 faculty members from the University of Notre Dame calling on Barrett to call a halt to the nomination process until after the November presidential election. The faculty members who signed the letter were in a range of departments, from physics to anthropology to music.

Booker proceeded to ask some questions. Does Barrett condemn white supremacy? Barrett answered yes. Does she think every president should make a commitment to the peaceful transfer of power? Barrett said the question seemed to be referring to Trump’s statements, and to the extent that this is a political controversy right now, she doesn’t want to express a view.

Booker pressed on, asking in light of the Founding Fathers and traditions, should a president commit himself to a peaceful transfer of power? Barrett answered that one of the beauties of America is that the country has had peaceful transfers of power since the beginning of the republic.

“It is part of the genius of our Constitution and the good faith and good will of the American people” that the country has not have the type of situations that occurred in other countries, she said.

Booker also asked: Does a president have the power to pardon himself for future or past crimes? Barrett would not answer. Nor would she answer a question about the emoluments clause and Trump’s indebtedness.