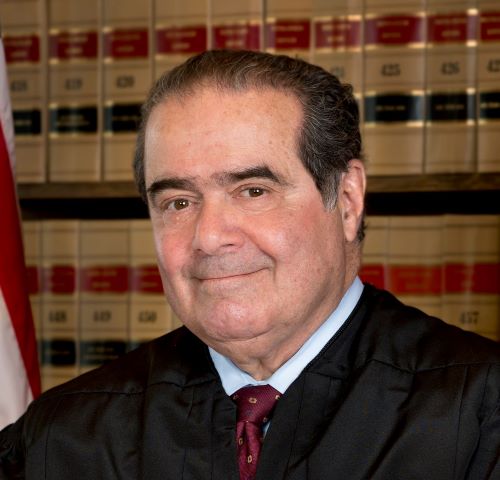 A law professor at Emory University is under fire after he tweeted that the late U.S. Supreme Court Justice Antonin Scalia was “basically a klansman.” Photo by Steve Petteway, PD US Courts, via Wikimedia Commons.

Updated: A professor at the Emory University School of Law is under fire after he tweeted that the late U.S. Supreme Court Justice Antonin Scalia was “basically a klansman.”

Law professor Darren Hutchinson made the comment regarding a memo by Scalia to other justices as they considered the case McCleskey v. Kemp, report Above the Law, Fox News and a blog post by Jonathan Turley, a professor at George Washington University Law School.

In the 1987 McCleskey ruling, the Supreme Court refused to strike down the death penalty in Georgia, despite statistics showing that defendants charged with killing white victims in the state were 4.3 times as likely to receive a death sentence as defendants charged with killing Black victims. The statistics were known as the Baldus study because one of the researchers was David Baldus, a professor at the University of Iowa College of Law.

According to Hutchinson’s Jan. 9 tweet, Scalia indicated that he planned to join the majority opinion by Justice Lewis Powell in the case, with two reservations.

“I disagree with the argument that the inferences that can be drawn from the Baldus study are weakened by the fact that each jury and each trial is unique or by the large number of variables at issue. And I do not share the view, implicit in the opinion, that an effect of racial factors upon sentencing, if it could be shown by sufficiently strong statistical evidence, would require reversal. Since it is my view that the unconscious operation of irrational sympathies and antipathies, including racial, upon jury decisions and (hence) prosecutorial decisions is real, acknowledged in the decisions of this court, and ineradicable, I cannot honestly say that all I need is more proof,” Scalia had written.

Above the Law summarized Scalia’s view this way: “Scalia urged colleagues to ignore evidence of racial bias—in a death penalty case—not because it was inaccurate, but because he thought racial bias is ineradicable so … them’s the breaks!”

Turley called Hutchinson’s tweet a “disgraceful attack” that amounted to character assassination, rather than reasoned criticism.

Hutchinson stuck to his guns in later tweets. He responded to a commenter who said far too many people treat accusations of racism worse than they treat even the worst racial slur.

“This is so true!” Hutchinson wrote. “The recent nuttiness over Justice Scalia and race. Calling him out is worse than his view that executing people whose sentences were impacted by race is fine. It’s a form of inversion. Make the guilty party innocent and the victim guilty.”

Hutchinson is the Emory University law school’s inaugural John Lewis chair for civil rights and social justice. He joined the law school in 2021.

Updated Jan. 20 at 1:30 p.m. to track wording of the McCleskey v. Kemp decision’s description of the Baldus study.