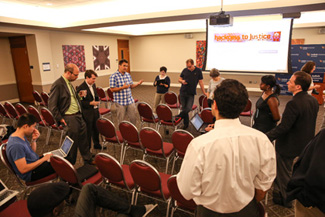 Participants at Hackcess to Justice. Photo by Michael Clarke.

A disaster-relief mobile app that provides individuals with legal information, resources, and forms for assistance. An interactive tool that calculates whether a user is eligible for indigent legal services, as well as how much prison time criminal defendants face. A game that determines whether a user is in need of legal representation. A website that guides Massachusetts residents through the state’s divorce process. An iOS app that creates legally binding health care proxies and nonbinding living wills.

All these tools were created on Thursday and Friday by lawyers and developers participating in the inaugural “Hackcess to Justice” legal hackathon. Held at Suffolk University School of Law in Boston in conjunction with the ABA Annual Meeting, the hackathon’s main purpose was to use technology to create tools that would expand access to justice for individuals who might not otherwise know whether they needed help and how they could obtain legal representation.

The hackathon, which was co-sponsored by the ABA Journal and Suffolk University Law School, called for applications or programs that would solve one of several problems identified by the Legal Services Corporation, including: lack of adequate self-assessment tools for individuals to determine whether they need representation; document automation; and creation of expert systems to assist attorneys and legal services providers.

“You are about to embark on the noblest of ventures,” LSC president Jim Sandman told hackathon participants on Thursday during his opening address. Sandman noted that over 65 million Americans qualify for free civil legal aid, and that over 80 percent of their civil legal needs had gone unmet.

“It is our goal to provide some form of effective assistance to 100 percent of the population,” said Sandman. “Unfortunately, that is a very different world than the one we live in today. But it is not acceptable to turn away as many people with nothing as the system today does.”

With that in mind, participants set about creating tools that any person with a mobile device or computer could use in order to evaluate his or her legal needs. 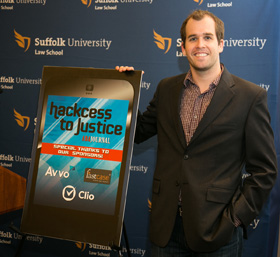 William Palin, a Somerville, MA attorney, won the $1,500 first prize for his iOS app, PaperHealth. The form automation app creates living wills and health care proxies for individuals and emails them to designated hospitals and health care providers. “Most people have no advanced plans for medical emergencies,” said Palin, who was inspired to create this app after his brother had surgery and had to draft a health care proxy at the hospital. “I believe we can help bring down health care costs with simple preparation.” Palin said he plans on releasing the app, which also features a frequently asked questions section and signature screens for signatories and witnesses, for free via Apple’s App Store.

“We were heavily affected by Superstorm Sandy, and information like this was really lacking,” said Friedl.

Third prize went to a team consisting of David Zvenyach, a general counsel in Washington, D.C.; David Colarusso, staff attorney for the Massachusetts Committee for Public Counsel Services; and William Li, a computer science PhD student at the Massachusetts Institute of Technology. The three created Due Processor, an interactive tool that allows users to determine their eligibility for indigent legal service in Massachusetts, and for criminal defendants to calculate their state prison sentences.

“When you go through the justice system, some things are better done by machines,” said Colarusso. “Especially when it involves math.”

In his closing remarks on Friday, Sandman said that he was thoroughly impressed by every project and was especially heartened by the one common theme he saw in each of the entries.

“I thought that every application and every person shared a human quality that most people would never think to associate with technology or a hackathon—empathy,” Sandman said. “You all demonstrated the ability to put yourself in the shoes of another person and figure out what they need and how you might help.”

Sandman concluded by noting that the legal profession needs to embrace technology and its vast potential for increasing access to justice. “We are not interfering with the traditional relationship between an attorney and a client. We are helping to make it even better.”