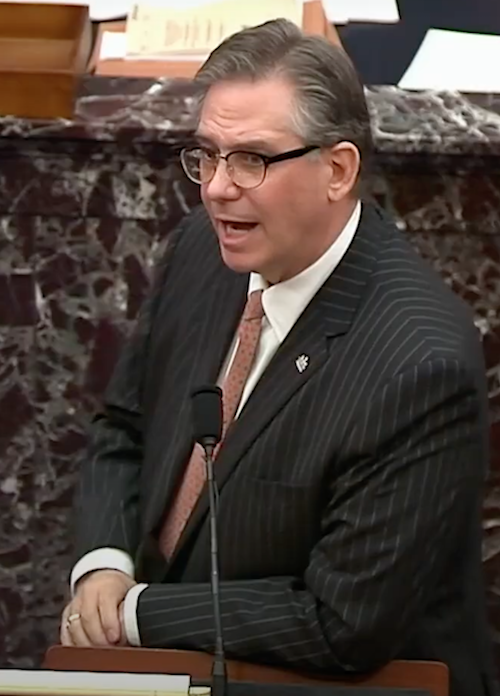 Bruce L. Castor Jr. argues on the floor of the U.S. Senate during the second impeachment trial of former President Donald Trump on Feb. 9. Photo from Wikimedia Commons.

The second impeachment defense of former President Donald Trump got off to a slow start Tuesday.

Philadelphia lawyer Bruce L. Castor Jr. praised the Democratic presentation, condemned the Jan. 6 Capitol riot, commented on the Senate, talked about the late Sen. Everett Dirksen, mentioned the senates of ancient Rome and Greece, commented on “Representative so and so” whose name he couldn’t remember, and referred to Sen. Ben Sasse’s state of Nebraska as a “judicial thinking place.”

“I have no idea what he’s doing,” said Alan Dershowitz, a professor emeritus at Harvard Law School, in an interview on Newsmax. “Maybe he’ll bring it home, but right now, it does not appear to me to be effective advocacy.”

Dershowitz had defended Trump at his first impeachment trial.

Dershowitz wasn’t the only person to criticize Castor, the former district attorney of Montgomery County, Pennsylvania, report the National Law Journal, the Washington Post (here and here), the New York Times, NPR and the Huffington Post. Other included Republican senators, the news media and commenters on Twitter.

“Just in,” tweeted actor George Takei, who played Sulu on Star Trek. “Bruce Castor is being paid by the word.”

The Washington Post highlighted this rambling statement by Castor when he was making a point about free speech:

“I saw a headline: Representative so and so seeks to walk back comments about—I forget what it was, something that bothered her. I was devastated when I saw that she thought it was necessary to go on television yesterday or the day before and say she needs to walk back her comments. She should be able to comment as much as she wants, and she should be able to say exactly how she feels.”

Cassidy indicated that the GOP presentation Tuesday had affected his latest vote.

The second defense lawyer, David Schoen, was more polished as he argued that the impeachment was intended to block Trump from running for future office and amounted to a denial of the right to vote, according to the National Law Journal. Still, he acknowledged the criticisms, USA Today reports.

“I’ll have to do better next time,” Schoen said.

For his part, Castor said Tuesday was a good day.