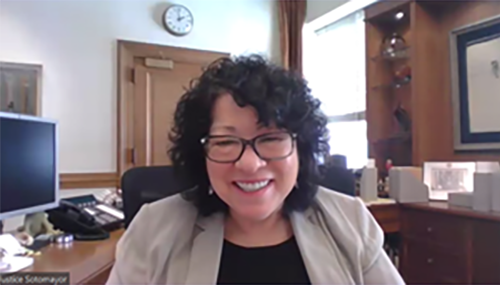 When U.S. Supreme Court Justice Sonia Sotomayor thinks back to her first year of law school, she wishes someone would have told her not to be afraid to ask more questions.

“I went through my first year like a deer in headlights,” Sotomayor said Wednesday at the inaugural ABA Equity Summit: Advancing Diversity, Equity, and Inclusion in the Legal Profession and Beyond. “That’s how I felt—frozen and often insecure, thinking I was the only one who didn’t understand what the professor was talking about or who was reading and felt a little lost in my reading and not sure what I was doing and why.”

But mentors want to help students who show curiosity and a willingness to listen and learn, Sotomayor told Jaime “Jim” Taronji, the Antitrust Law Section representative to the Diversity and Inclusion Advisory Council, who moderated the virtual discussion. It was billed as a highlight of the four-day summit, which provided lawyers, judges, law students and other legal professionals with best practices and practical tools to address crucial diversity, equity and inclusion issues.

“People want to help,” Sotomayor said. “But you have to ask them for it, and you have to identify what it is that you’re not seeing and explain why. That’s advice I really would have appreciated my first year: how to be more willing to say, ‘I don’t know?’”

Sotomayor, whom former President Barack Obama nominated to the Supreme Court in 2009, told the 500 people in attendance that she continues to ask questions in conferences with her colleagues.

She described a situation in which one of them brought up something that she didn’t understand. She drew a question mark on a piece of paper and passed it to a senior colleague who was sitting next to her. During the break, he told her that it wasn’t actually relevant but gave her more information about the case, so she could research it later.

“I laughed, because here I am on the Supreme Court, and I think a lot of people would have been ashamed to say, ‘I don’t know,’” Sotomayor said. “I’ve never felt that way. If I’m ignorant, and someone says something and I should have thought about it, I look up and say, ‘I don’t know why I missed that, thank you for reminding me.’ But other times, I find out it’s not something I would’ve known or should’ve known without having someone explain it. Be open to your own limitations in knowledge.”

Taronji, an attorney at the Federal Trade Commission, also asked Sotomayor how she has handled discrimination throughout her life and career. He pointed out earlier in their conversation that they shared Puerto Rican heritage. 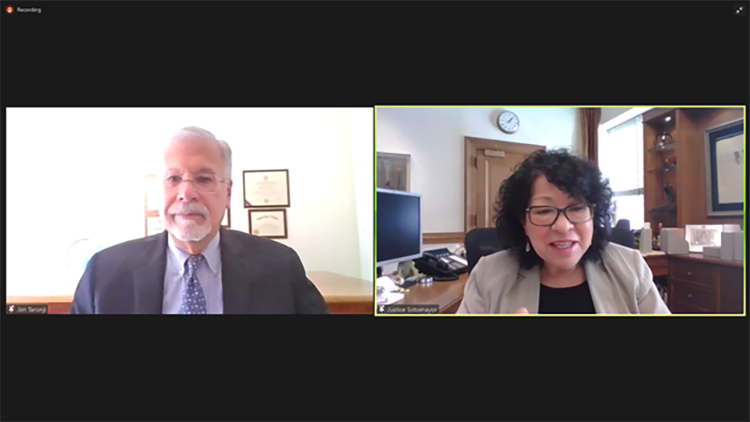 Jaime “Jim” Taronji led the discussion with Justice Sonia Sotomayor before opening up the floor for audience questions.

Sotomayor, who is the first Hispanic member of the Supreme Court, said she discussed many instances of people doing or saying things that she considered racist and discriminatory in her book, My Beloved World, but that there wasn’t a formula for responding to them.

“Sometimes you handle them gently, understanding that some people are not doing them intentionally or with malfeasance in mind,” she said. “And then sometimes you have to get up and actually file a complaint, and do something proactive. It really depends on the situation and on what you think the impact can be by the course of action you’re taking.”

Sotomayor said she filed a complaint while at Yale Law School after a lawyer who was interviewing her for a job asked whether she got into the institution—and into Princeton University, where she received her undergraduate degree—because she was Hispanic. In that situation, she said she realized she had to prevent the lawyer from treating others in the same way that he had treated her.

Taronji also took questions for Sotomayor from the audience.

Vanessa Ibarra, a 1L at the University of the Pacific McGeorge School of Law, asked the justice how a first-generation Latina law student could ensure that “the flame blazes forever.” 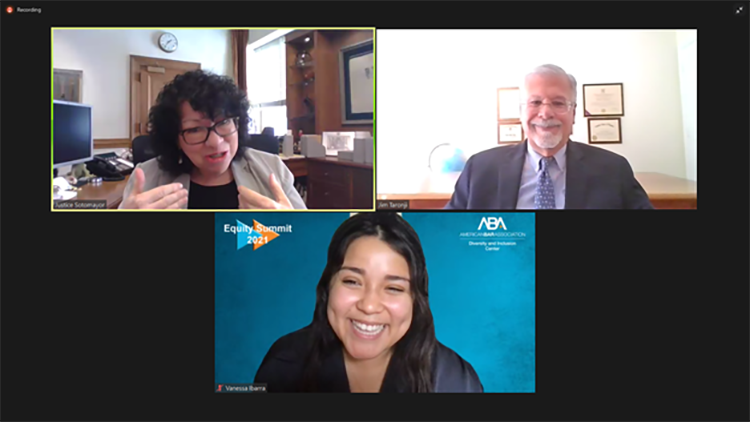 Vanessa Ibarra (bottom) was able to ask Justice Sonia Sotomayor a question during the session, which was moderated by Jim Taronji (top right).

Sotomayor told Ibarra that when Obama called her to say he had selected her for the Supreme Court, he asked her to stay connected to her community. She said that had also been important to her in college and law school, when she invited her mother, brother and other relatives to visit and stay with her.

“By talking to them about your experiences, by letting them see it, by letting them understand how insecure you might feel in this new world, by your sharing of insights about what you’re experiencing, they can walk with you instead of being left behind,” Sotomayor said. “By walking with you, you continue always to understand the needs of your community, and that keeps stoking the flame.”

Among the final questions, Daihana Estrada, a law clerk with the First Judicial District in Minnesota, asked Sotomayor what advice from her mother has helped her in her career.

The justice said her mother told her early on to look for the good in every person in her life. She applies that message to her life and her work, in which she often vehemently disagrees with her colleagues.

As an example, Sotomayor explained that people find it odd that she considers Justice Clarence Thomas a friend, even though their judicial philosophies are so different. But she said there are few men who have a “kinder heart” than him. When someone in her family died, he sent flowers. And when she has been sick, he checked in on her.

“I see in him the basic caring about people that I have,” Sotomayor said. “We are both committed friends and committed family members.

“And so, in seeing that good in him, there is no reason for me to take our personal disputes and translate it into our personal interactions. We work together. We have to work together for the rest of our time on the court.”