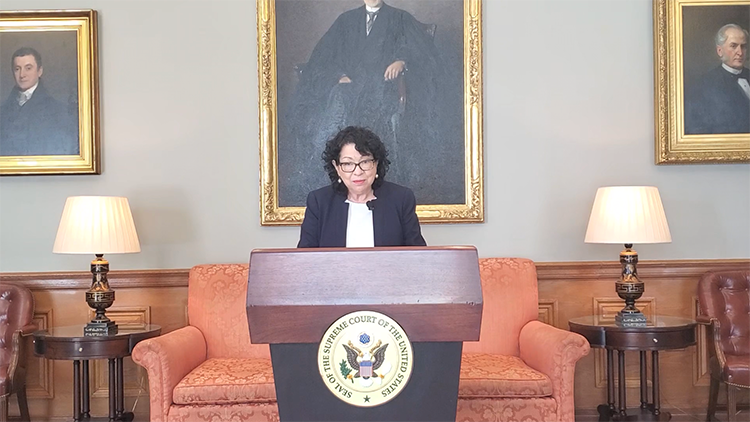 Justice Sonia Sotomayor delivered her address as a remote recording.

Justice Sonia Sotomayor told Yale Law School grads this week that they are graduating in a world where the legal profession is viewed more cynically than when she graduated from the same school in 1979.

In a May 24 commencement speech, Sotomayor contrasted her situation with that of today’s grads. “Not to scare you,” Sotomayor said in recorded remarks, “but in a sense, your paths in the law will be more challenging than mine was when I graduated.”

“Growing up in a South Bronx public housing project, against the backdrop of the civil rights movement, I knew I wanted to be a lawyer from an early age. In those times, there was simply no higher calling than to seek justice on behalf of those who were denied it. That conviction only grew stronger by the time I graduated law school. We understood the law as a force for good.”

Job opportunities were plentiful when Sotomayor entered practice, and graduates were less burdened with debt, she said.

“You are graduating into a very different world,” Sotomayor said. It is a world “where lawyers are less revered, one where the good that lawyers can do is viewed more skeptically and even cynically by some, one where it is especially challenging to sustain the cost of living while working at a public interest job, especially if you have family obligations. … The last few years have been particularly tumultuous for the legal profession.”

Law.com had coverage of Sotomayor’s speech and her three reflections for law grads.

“The first is that process matters,” Sotomayor said. “It is critical to justice.” Law students civil procedure cases for a reason, she said.

“The procedures by which legal claims are formed, channeled and decided can matter as much as the substance of the claims themselves,” she said. “A recurring theme in my jurisprudence has been identifying and addressing injustices in our legal procedures.”

Sotomayor also told law grads that storytelling is important, and honesty matters above all else.

“The core work of our profession is to translate real people’s stories into a common legal language,” she said.

“Every term I try my best to reflect in my opinions the real experiences of the people affected. One of the most important parts of having one’s day in court is simply being heard.”