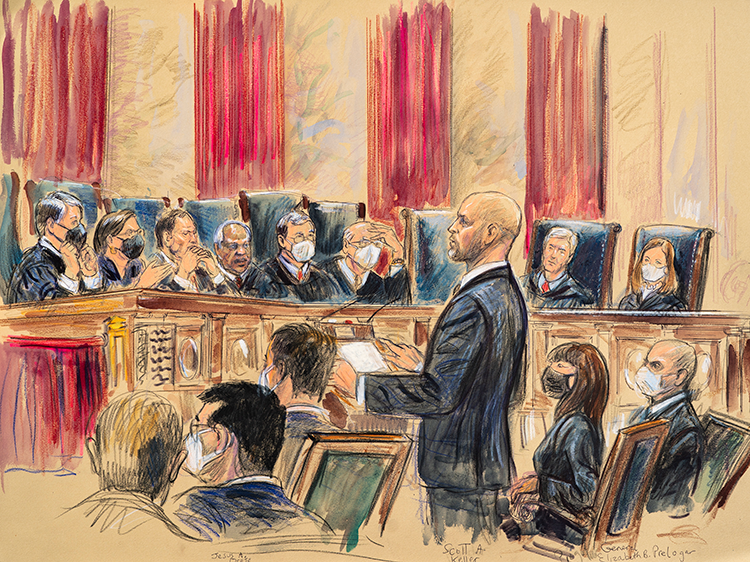 This courtroom sketch from the Friday hearing depicts lawyer Scott Keller standing to argue on behalf of business groups challenging a vaccine-or-testing requirement on the nation’s large employers. Solicitor General Elizabeth Prelogar is seated at the right. Illustration by Dana Verkouteren via the Associated Press.

The Supreme Court scheduled a special hearing to consider the two mandates, which were issued in November. The first directs employers with more than 100 workers to require vaccinations or face masks and weekly COVID-19 tests. The second policy applies to health care employees who work for hospitals, nursing homes and other facilities that participate in Medicare or Medicaid programs.

During oral arguments over the workplace vaccine mandate, several of the conservative justices seemed to agree with private businesses and Republican-led states that Congress or individual states—rather than a federal agency—should implement and lead a public health response, the Washington Post reports. CNN, the New York Times and NBC News also have coverage.

“I understand the idea that agencies are more expert than Congress. I understand the idea that they can move more quickly than Congress. But this is something that the federal government has never done before,” said Chief Justice John G. Roberts Jr., according to CNN, which also provided live updates during arguments. Roberts is one of the swing votes that the Biden administration will likely need to keep the mandate in place.

The Occupational Safety and Health Administration had adopted the vaccine mandate as an emergency temporary standard, an emergency rule that doesn’t initially have to go through the notice and comment practice.

The 6th U.S. Circuit Court of Appeals at Cincinnati was picked in a court drawing to hear 34 consolidated challenges to the vaccine mandate. It reinstated the mandate Dec. 17, saying “given OSHA’s clear and exercised authority to regulate viruses, OSHA necessarily has the authority to regulate infectious diseases that are not unique to the workplace.”

Elizabeth Prelogar, the Department of Justice’s solicitor general, told justices again Friday that Congress already provides the OSHA with the necessary authority, according to NBC News.

“This is the deadliest pandemic in U.S. history, and workers are dying because of their exposure to the virus at work,” she said.

The OSHA’s rule is set to take effect Monday, but the agency has said it will not cite employers for noncompliance until Feb. 9. CNN reports that Justice Samuel Alito suggested that the court may have to enter a brief stay to allow more time to consider the case.

Lawyer Scott A. Keller, who represents the National Federation of Independent Business, requested that the high court make its decision by Monday.

“Businesses have encouraged and incentivized their employees to get vaccines,” Keller told the court, according to the Washington Post. “But a single federal agency tasked with occupational standards cannot commandeer businesses economywide into becoming de facto public health agencies.”

Some of the conservative justices seemed more open to the idea of requiring health care workers to be vaccinated during the second set of oral arguments.

Roberts noted the effect of COVID-19 on people who are older or low-income and often treated at facilities that receive Medicare or Medicaid funds, the Washington Post reports. The chief justice said, “People already get sick when they go to the hospital, but if they go and face COVID-19 concerns, well, that’s much worse.”

Republican-led states brought the challenge against the Centers for Medicare & Medicaid Services’ vaccine mandate, arguing that it must also be permitted by Congress. The mandate includes exemptions for religious and medical reasons.

The 5th Circuit at New Orleans had ruled in mid-December that an injunction blocking the vaccine mandate applies in the 14 states that filed legal challenges. A separate preliminary injunction on appeal before the 8th Circuit at St. Louis applies to 10 additional states.

According to CNN, the three liberal justices are likely to vote in favor of both of the Biden administration’s vaccine mandates.

In this case, Justices Elena Kagan and Stephen Breyer asked Jesus A. Osete, Missouri’s deputy attorney general, whether the Department of Health and Human Services could require employees to wash their hands or prevent workers with diphtheria from entering facilities.

When Osete said yes, Breyer reportedly asked, “Why can they say the one and not the other?”

One justice and two of the six lawyers who delivered oral arguments were absent from the courtroom Friday.

Justice Sonia Sotomayor participated remotely from her chambers, according to CNN. A court spokesperson said Sotomayor, who is fully vaccinated and received her booster shot, “is not ill.” Sotomayor is a diabetic, one of the conditions that could increase the risk of bad complications with COVID-19.

A statement from the Ohio Attorney General’s Office said Flowers is vaccinated and received the booster shot but tested positive for COVID-19 after Christmas, Reuters reports. While his symptoms were mild, “the court required a PCR test yesterday, which detected the virus, so for that reason, he is arguing remotely,” according to the statement.

Reuters reports that Murrill’s office said she would argue remotely “in accordance with COVID protocols” but did not provide further details, according to Reuters.

The cases are National Federation of Independent Business v. Department of Labor and Biden v. Missouri.