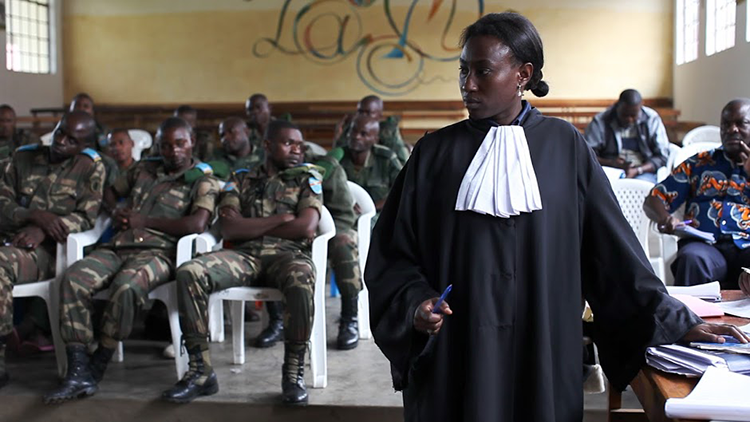 Mireille Kahatwa Amani, an ABA ROLI program director, is being featured in the documentary The Prosecutors for her work combating sexual violence in the Democratic Republic of the Congo. Footage by Michael Christopher Brown, directed by Leslie Thomas, produced by ART WORKS Projects.

Last month, after years of efforts, the warlord Marcel Habarugira Rangira, lieutenant colonel of the Congolese armed forces, was convicted of war crimes before a military tribunal in Goma, eastern Democratic Republic of the Congo. Mireille Kahatwa Amani was one of the chief attorneys from the American Bar Association Rule of Law Initiative who worked to convict him.

Habarugira had created an armed group, the “Nyatura Intégré,” in the territory of Masisi in the eastern DRC. For several years, the Nyatura caused desolation and destruction in a large part of Masisi in their confrontation against another armed group, the “Raiya Mutomboki,” created by another tribe. Child conscription, rape, sexual slavery, looting—these are some of the sufferings that the Nyatura rebels inflicted on the children, women and men of this territory.

The arrest of Habarugira on Aug. 7, 2014, by the Congolese armed forces was a trigger of hope for these populations to finally being able to share their story and find justice.

We secured a historic decision. It is the first time that a court in the DRC convicted an individual for conscripting and using child soldiers.

From March to December 2015, investigations took place across Masisi, with the support of the ABA ROLI, the United Nations peacekeeping forces in the DRC (known as MONUSCO) and Lawyers Without Borders. We heard over 130 victims of child recruitment, forcible conscription, rape and sexual slavery. ABA ROLI funding ensured the smooth operation of the investigations and the gathering of evidence, through a grant from the U.S. State Department.

Even after Habarugira’s arrest, members of his armed group continued to operate in Masisi. It was, therefore, crucial to guarantee the protection of the victims. Otherwise, they would have been unwilling to participate in the investigations necessary to build a case against Habarugira.

The trial took place from December 2018 to February. For four years after Habarugira’s arrest, his victims continued to live in fear. This long delay was a curb on the access to justice. Victims need to know the fate of the perpetrator of the very grave exactions that had been done against them. The perpetrator also has to know what justice means.

It is difficult, if not impossible, for the victims to understand and follow the legal proceedings on their own. They need advice and representation. Amani, together with three other ABA ROLI lawyers and one ABA ROLI psychologist, supported the victims directly by assisting them during the investigations and their appearances before the court. Another generous grant from the DRC Social Fund enabled ABA ROLI to provide victim support services throughout the trial, including transportation to and from Goma, accommodation and catering.

The beginning of the trial was a relief for the victims, who learned that their voices and stories would be heard by the judges, and the defendant, who was given the possibility to defend himself. It was also a relief for the judicial system, given the prosecution’s sense of fatigue and its desire to finally put an end to this long, ongoing case, if not to say “expedite” it.

The trial was fraught with irregularities. Habarugira used all imaginable means to intimidate the victims and discourage them from testifying through his men still operating in Masisi. No victims of sexual slavery were willing to come to the trial to support the depositions they had made during the investigations. The defendant also pressured a number of victims to turn from victims into defense witnesses by going back on the declarations they had made to the investigators. This constituted witness tampering.

The Operational Military Court of Goma handed down its decision, which cannot be appealed, on Feb. 1. It sentenced Habarugira to 15 years in prison under international law for the war crimes of rape and conscription or use of child soldiers under the age of 15. It also sentenced him under Congolese military law for violating orders and participating in an insurrectionary movement. The court further awarded damages to the victims participating in the trial as civil parties.

Habarugira’s conviction for the recruitment and use of child soldiers is an important jurisprudence when it comes to the ongoing trial of another warlord, Ntabo Ntaberi, better known by his war name of “Sheka.” Sheka is being prosecuted for war crimes and crimes against humanity, including using child soldiers. ROLI lawyers are also assisting the victims in this case.

Still, there are a number of weaknesses with the decision. The court acquitted Habarugira of the charge of sexual slavery. Yet several women and girls were kidnapped and repeatedly raped by the Nyatura rebels. Some women became pregnant as a result. The defendant’s strategy was to force the parents of the children who had been raped to adhere to the group’s ideology and to have as many children from this tribe as possible to join his armed group. We can also doubt whether Habarugira’s light sentence of 15 years is proportionate to his crimes. Having already served four, there are only 11 years left on his sentence.

A remaining obstacle is the question of reparations. For a justice problem to be resolved, the victims, whose plight has been recognized by a court, must be able to recover their rights; the judgment must be executed. Yet civil compensation is a huge challenge in the DRC. To execute a judgment and hence recover their damages, victims must first pay a proportion of the reparation awarded to them. This proportion is set at 3 percent of the allocated amount. For many victims, and particularly victims of looting, this is unattainable. Reparations should not be theoretical; there are a vital element of delivering justice to the victims.

The Habarugira trial is a lesson and a model for future decisions; yet it continues to highlight the difficulties of giving justice in the DRC. The essential question remains and our struggle continues: How can we ensure that victims of serious human rights violations obtain justice?

Mireille Kahatwa Amani is the ABA ROLI program director of a project funded by the State Department Bureau of International Narcotics and Law Enforcement Affairs on strengthening judicial capacity, combating impunity and restoring public confidence in the rule of law in the DRC through a digital case management system. She is a member of the Goma Bar in the DRC and has appeared in several trials of mass rape and other mass atrocity cases, including the “Minova” trial and most recently in the trial against Habarugira and Sheka. Her work combating sexual violence in war is featured in the upcoming documentary The Prosecutors. She can be reached at [email protected].

Anna Khalfaoui is the Satter fellow at the American Bar Association Rule of Law Initiative in Goma. She is a member of the New York Bar and holds an LLM from Harvard Law School, having previously studied at the University of Cambridge, King’s College London and Sciences Po Paris. At ABA ROLI, she works on the ongoing case against Sheka for war crimes and crimes against humanity. Through the ABA ROLI Atrocity Prevention Program, she also works on implementing an early warning and response system and preventing conflict through alternative dispute resolution. She can be reached at [email protected].

ABA Abroad is a column highlighting the work of the ABA’s Center for Global Programs, which comprises the Rule of Law Initiative, Center for Human Rights, and the ABA’s presence at the United Nations.

Rule of Law Insights: “Fighting Against Impunity in the DRC: Historic Conviction of an Armed Group Commander”