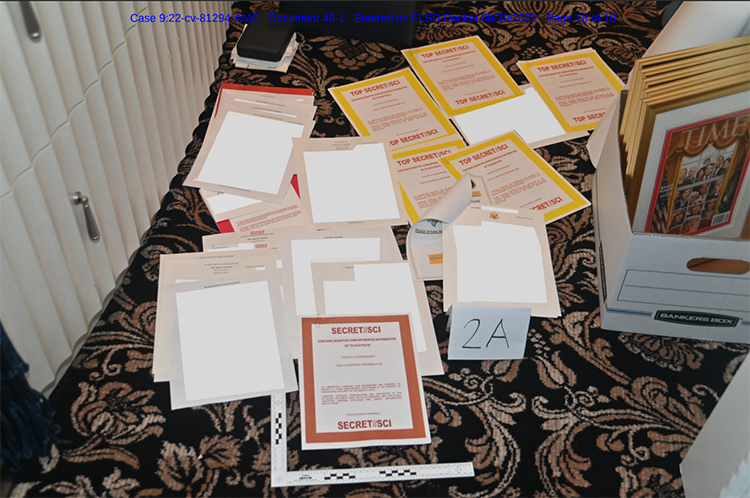 Updated: Lawyers for former President Donald Trump mentioned the possibility of an indictment in a letter resisting a special master’s request for information about the declassification of documents seized at Trump’s Mar-a-Lago home in Palm Beach, Florida.

In the Sept. 19 letter, Trump’s lawyers said affidavits or declarations on the matter wouldn’t be needed unless Trump alleges declassification in seeking the return of documents seized in the Aug. 8 search.

Otherwise, the letter said, the special master process would force Trump to “fully and specifically disclose a defense to the merits of any subsequent indictment.”

Documents recovered in the search include about 100 records marked as classified.

The Washington Post called the reference to a possible indictment “a remarkable statement that acknowledges at least the possibility that the former president or his aides could be criminally charged.”

Coverage by Politico sees the request by the special master, Senior U.S. District Judge Raymond J. Dearie, as an indication of “a tougher road ahead” for Trump.

The Trump lawyers also objected to a request for briefing on whether litigation seeking return of the records should take place before U.S. Magistrate Judge Bruce Reinhart of Florida, who approved the search warrant. The letter said there is no indication that the judge who appointed Dearie, U.S. District Judge Aileen Cannon of the Southern District of Florida, planned to carve out litigation on that issue.

In a hearing Tuesday, Dearie told Trump’s lawyers that he will consider the documents classified if the government offers evidence to support it and Trump offers nothing to refute it, report Reuters and Politico.

“You can’t have your cake and eat it,” Dearie said.

Cannon appointed Dearie to review the seized documents for claims of executive privilege and attorney-client privilege. She also stopped federal prosecutors from using the materials in their criminal investigation during the review.