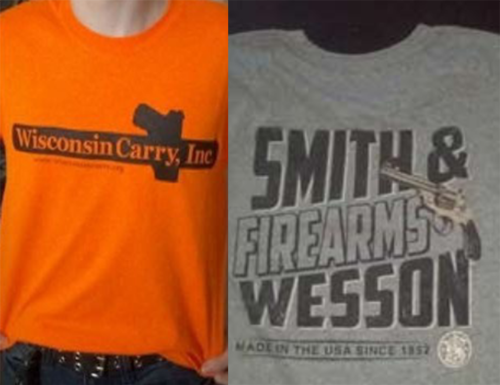 A federal appeals court has ruled that a judge applied the wrong legal standard when he tossed a student’s challenge to his high school’s ban on T-shirts with gun images.

Under Tinker, public schools can restrict student speech if the expression “would materially and substantially disrupt the work and discipline of the school” or invade the rights of others.

A student known as “A.L.” in the 7th Circuit case had claimed that his First Amendment rights were violated when the Kettle Moraine High School in Wales, Wisconsin, did not allow him to wear his T-shirt. The garment contained the logo of Wisconsin Carry Inc., a gun-rights group. The logo incorporated an image of a handgun.

On the back of the T-shirt was the text of Wisconsin’s constitutional provision on the right to bear arms. It was covered up, however, by A.L.’s jacket.

A.L.’s shirt carried a political message conveying a positive opinion of guns and the right to bear them, the 7th Circuit said.

The Wisconsin Carry T-shirt “is materially indistinguishable from the black armbands in Tinker,” worn to protest the Vietnam war, the 7th Circuit said. “Tinker is the controlling authority.”

The student plaintiffs in Tinker won their case.

A second student had also sued when the Shattuck Middle School in Neenah, Wisconsin, didn’t allow him to wear a T-shirt with a Smith & Wesson logo, which also included an image of a gun. Griesbach had consolidated and dismissed both students’ cases. The 7th Circuit didn’t reinstate the second student’s suit, however, because he was now in high school, and his case was moot.

Both students had asked the court to block enforcement of the no-guns-on-T-shirts policy, but they did not seek damages.

Administrators at both schools had told the youths that they couldn’t wear clothing depicting firearms, even though the dress codes merely banned “inappropriate” attire.

The case is N.J. v. Sonnabend.

Hat tip to the Volokh Conspiracy, which had highlights from the opinion. Courthouse News Service covered the decision.