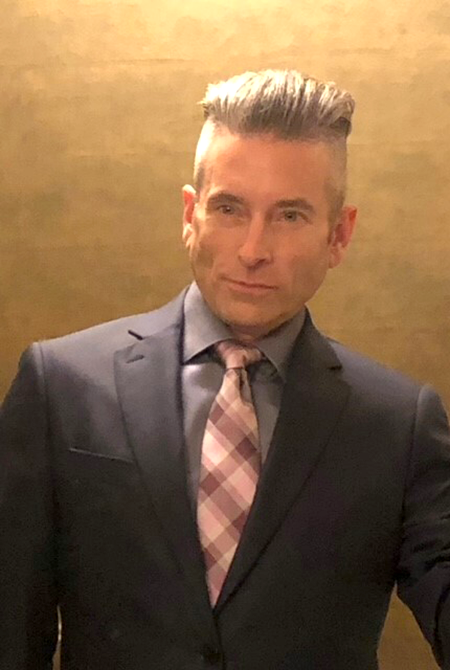 "I have a personal stake in [the work] as a person living with HIV," says Scott Schoettes. "But honestly, I live a very privileged life and have the luxury of being out about my HIV status."

Scott Schoettes had been advocating for individuals with HIV for more than a decade when he heard about Nick Harrison, a sergeant with the National Guard in Washington, D.C., who was denied a position in the Judge Advocate General’s Corps after testing positive for the virus.

Schoettes, then HIV Project director at Lambda Legal, a national nonprofit organization that protects the rights of people who are LGBT or living with HIV, led a team of attorneys in suing the U.S. Army and Department of Defense on behalf of Harrison in May 2018. In their lawsuit, they challenged longstanding policies that prevented people with HIV from deploying or commissioning as officers.

Later that year, Schoettes filed a separate case against the Air Force on behalf of two active-duty airmen, identified pseudonymously as Richard Roe and Victor Voe, who were told they would be discharged because they could no longer deploy as a result of their recent HIV diagnoses.

“There is a ton of deference paid to military decisions,” says Schoettes, who represented these plaintiffs even after starting his own practice in Chicago in November. “So we really had to make sure we painted this in the light that it truly exists, which is it’s based on misconceptions about HIV that are so deeply entrenched that they are prejudices that result in discriminatory treatment.”

Schoettes set out to establish that there was virtually no risk of transmitting HIV in a combat setting. Decades of research shows that people typically get HIV through sex or sharing needles or syringes, he says, and not when someone with the virus bleeds on them.

He also pointed to scientific advances in treatment, which made it possible for people with HIV to take medicine that reduces the amount of virus in their blood. In support of summary judgment, he submitted expert testimony that the low risk of HIV transmission is further reduced when service members adhere to their medication regimen.

In a landmark ruling in April, Judge Leonie Brinkema of the Eastern District of Virginia sided with Schoettes’ clients, whose cases were joined for discovery and summary judgment. She ordered the Department of Defense to stop discriminating against people with HIV and permit them to deploy and commission as military officers.

Brinkema also directed the Army to reconsider its decision to deny Harrison the commission necessary to join the JAG Corps and the Air Force to rescind its decisions to discharge Roe and Voe.

Schoettes, who is HIV-positive, says the ruling will not only demonstrate to employers that people with HIV can do their jobs, but also help reduce negative attitudes and beliefs about the virus.

“There is a bigger message that the change in military policy will send around breaking down that stigma,” he says. “I hope we can embrace the science, and that this big employer that is so well respected in our society will get others to rethink their views around HIV and the risks that really don’t exist when it comes to transmission.”

Schoettes’ path to advocating for people with HIV started in the northwest suburbs of Chicago, where he fell first for musical theater.

“I’ve always been a ham, ever since I was a little kid,” he says.

As a senior, Schoettes played both the wizard Merlin and King Arthur’s illegitimate son Mordred in his high school production of Camelot. He joined the chorus in between performances and remembers thinking during a quick costume change that he wanted to spend his life on the stage.

He moved to Los Angeles, where he received a bachelor of fine arts in acting from the University of Southern California in 1989. Over the next decade, he sang and danced in several roles, including as the original Aladdin at Aladdin’s Oasis in Disneyland, and directed new musical theater works.

Schoettes was on a national tour of West Side Story—in which he played Action, one of the Jets, and understudy Riff, their leader—when he decided to go to law school. He studied for the LSAT on the bus and took the test in Oklahoma in 1998.

“I had some proclivity to do well in this area,” says Schoettes, who was accepted to Georgetown University Law Center. “I was interested in going into LGBT civil rights work. Matthew Shepard had been killed not that long before then. I recognized as a gay man that there was a lot of work still to be done.”

In 1999, a few months before he left for Washington, D.C., Schoettes was admitted to the hospital for pneumocystis pneumonia and discovered he had HIV. While he was open about his sexual orientation, he chose to share the news with just close friends in law school.

“I just wasn’t sure how people who didn’t know me on first meeting would respond or how potential employers might respond,” he says. “This was at a time when I knew this wasn’t going to kill me, and I had lots of years left to live. But the popular perception was still that HIV was invariably fatal.”

Schoettes came out about his HIV status in 2007, when he was working as a general litigation associate at Latham & Watkins in Chicago. He was turning 40 and registered for the AIDS/LifeCycle, a 545-mile bike ride from San Francisco to Los Angeles that benefits the San Francisco AIDS Foundation and Los Angeles LGBT Center.

By then, Schoettes had been at the firm for more than three years and felt comfortable asking his peers to donate to a cause that was important to him. Around the same time, he also began thinking about the next step in his career.

Schoettes advocates for other members of the HIV/AIDS community

Schoettes had long admired Lambda Legal and started as a staff attorney with the HIV Project in October 2007.

“I have a personal stake in [the work] as a person living with HIV,” he says. “But honestly, I live a very privileged life and have the luxury of being out about my HIV status.

“I felt pretty blessed to be able to help people who don’t have those privileges and who are within my community and maybe even within the gay community, within a group that I think is sometimes stigmatized by our own community.”

Schoettes played a part in shaping the ADA Amendments Act of 2008, which clarified that the Americans with Disabilities Act protects people living with HIV from discrimination. The following year, he helped encourage the Department of Health and Human Services to propose the lifting of the HIV travel and immigration ban. Its final rule removed the virus from the list of health conditions that prevent entry into the United States.

His other notable work for the HIV/AIDS community includes both litigation and legislation involving HIV criminalization.

In 2014, Schoettes and his co-counsel asked the Iowa Supreme Court to set aside the conviction of Nick Rhoades, an HIV-positive man who was sentenced to 25 years in prison and required to register as a sex offender after having a one-time, protected sexual encounter with another man. The court ruled in favor of Rhoades, who did not transmit HIV to his partner, and recognized that people with HIV who take medication to reduce their viral load pose little risk of transmission.

Schoettes worked with HIV/AIDS advocates in Iowa to change the state’s HIV criminalization law the same year. It reduced the penalties for HIV exposure and transmission, except in cases involving individuals who intend to and actually do transmit the virus. It also provided individuals who employ precautions, such as using a condom during sex or taking medication, with a defense to prosecution.

“But Scott always, on this and any other matter that I worked with him on, was like a dog with a bone. He was absolutely relentless in his pursuit of a strategic avenue to get the result that he wanted to get for the community.”

Schoettes was appointed to the Presidential Advisory Council on HIV/AIDS in 2014 after helping develop recommendations to promote safe and voluntary disclosure of HIV status. He served on the council for several years before leading a group resignation in response to the Trump administration’s approach to the HIV/AIDS epidemic.

Now, in private practice, Schoettes is working on another case involving two young men who were denied a commission after graduating from the Air Force and Naval Academies as well as a habeas corpus petition on behalf of a man who was convicted of sexual assault by the Navy because he did not disclose his HIV status.

A longtime ABA member, Schoettes was honored by the ABA HIV/AIDS Impact Project for his commitment to HIV/AIDS advocacy earlier this month.

ABA Journal: “The ABA has advocated for people with HIV/AIDS for more than 30 years”