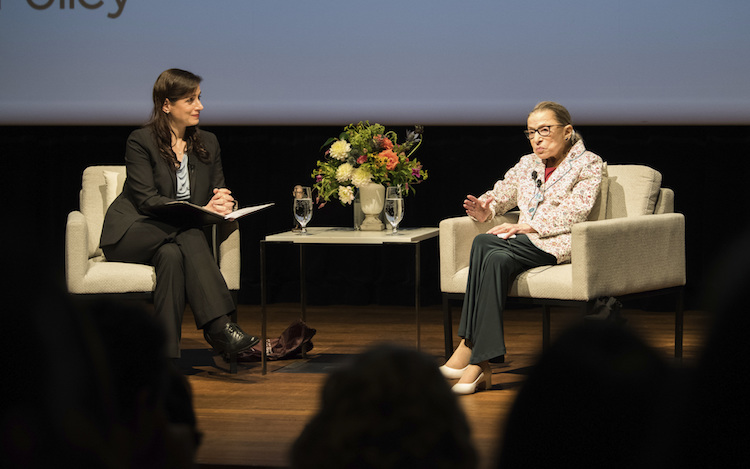 The country has come a long way, said U.S. Supreme Court Justice Ruth Bader Ginsburg, and that’s what keeps her optimistic for the future.

“Think of race discrimination in World War II. We were fighting a war against the most odious racial discrimination, and yet our own troops were originally separated by race. World War II is what hastened the decision in Brown v. Board of Education,” Ginsburg said Monday while speaking at the University of Chicago, where the Harris School of Public Policy honored her with its Harris Dean’s Award. The award is given annually in recognition for lifetime contributions to public policy.

Katherine Baicker, the school’s dean, joined the justice in the discussion, which happened at the university’s Reva and David Logan Center for the Arts performance hall. The audience submitted questions through the website sli.do, and someone asked Ginsburg whether she had any words of encouragement for those seeking justice around the world.

“They can be heartened by the number of similar people who think as they do. It can be hard to do anything as a loner, but if you get together with like-minded people, you can be a force for change,” said Ginsburg, 86.

An 11-year-old child asked whether she was always interested in being a Supreme Court justice. Ginsburg responded that when she graduated from Columbia Law School in 1959, there were hardly any female judges— and no women were on a federal appellate court until 1968, when President Lyndon B. Johnson appointed Shirley Hufstedler to the 9th U.S. Circuit Court of Appeals at San Francisco.

“Far from thinking about a judgeship, what I wanted was a job in law. There was no Title VII [of the Civil Rights Act of 1964]. There were few firms that were willing to take the chance on a woman, and there was no firm in the entire city of New York who would take a chance on a mother,” Ginsburg said. 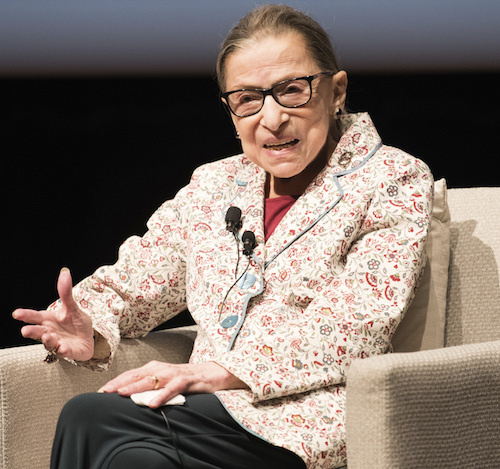 Justice Ruth Bader Ginsburg. Photo by Jean Lachat/courtesy of the University of Chicago.

“So it would have been an unrealistic expectation to think that I would someday become a judge,” Ginsburg said, who after clerking for U.S. District Judge Edmund L. Palmieri joined law school faculties at Rutgers University and Columbia University.

She also was a general counsel with the American Civil Liberties Union, from 1973 to 1980, where she co-founded the Women’s Rights Project. Ginsburg has argued six gender discrimination cases before the U.S. Supreme Court, five of which she won.

“If you look at things over the long haul, we have come a long way from how it once was,” Ginsburg told the audience. She mentioned Mildred Loving, a plaintiff in the landmark Supreme Court case Loving v. Virginia, which struck down in 1967 a state law banning marriage between interracial couples on the basis that it violated the 14th Amendment of the U.S. Constitution’s equal protection clause.

“Mildred Loving said that in her long life she had seen great changes. I feel that way, too,” Ginsburg said.

She also told the audience the Supreme Court is the most collegial place she has worked.

“We couldn’t get the job done that the Constitution delegates us to do unless we work well together. The press tends to concentrate on our divisions,” said Ginsburg, who’s known for her fiery dissents, which have been celebrated in pop culture. “Every term we agree more than we disagree,” she added, estimating that for the last term, cases split 5-to-4 approximately 20% of the time.

Another example of that collegiality came from her famous friendship with her former colleague, the late Justice Antonin Scalia, despite their different outlooks.

“The first time I heard him speak he was on the law faculty at the University of Chicago. I disagreed with a lot of what he said, but I was charmed by the way he said it,” she said, mentioning that they also had very different writing styles.

She’d like to see more of that collegiality in politics. During her 1993 Supreme Court confirmation hearing, Ginsburg said, no one had asked her about her work with the ACLU; and Justice Stephen G. Breyer, appointed to the court in 1994, also benefited from a bipartisan spirit. That was not the case, she added, with the confirmation hearings for Chief Justice John G. Roberts Jr. or Justices Sonia Sotomayor and Elena Kagan, who joined the court in the 2000s.

“I don’t know what it will take, but we really should get back to the way it was, when people were judged on their qualifications, rather than trying to guess how they will vote in contentious cases,” Ginsburg said. “Maybe great states people on both sides of the aisle will say: ‘Stop this nonsense; let’s do what we were elected to do.’ I do hope I will see that in my lifetime.”