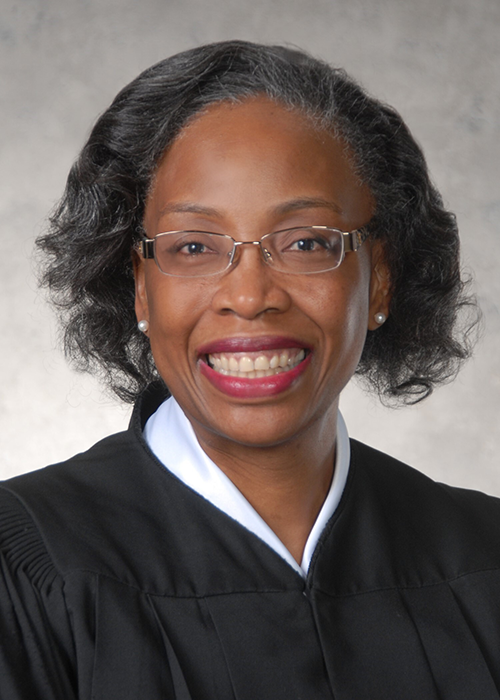 “It’s a lived experience that no one else has,” says Whitener, who was appointed in April 2020 and retained her position in the November 2020 election. “It’s like I tell some of my privileged colleagues: ‘Yes, we have a privileged position, all of us do, but mine ends when I take the robe off.’ “

“When I walk out into the world, what I am seen as is a Black woman,” she continues. “And of course, if I’m with my wife, I get treated as an LGBTQI person. If you see me on a day when I’m using my cane, I’m treated as a person with a disability. And if I open my mouth and ask something, then you know I’m not a native-born person. Those lenses are real, they are part of the community and they were not part of the court before. So it’s truly important. Representation does matter.”

Whitener looks at her cases through these diverse lenses. She was thrilled when she received her first assignment, State v. Jackson. John Jackson Sr., who was convicted of assault, was required to wear restraints during his court appearances. This was pursuant to jail policy as well as the trial court’s adoption of the policy for all incarcerated defendants.

Jackson appealed, arguing that his shackling without an assessment of whether restraints were necessary violated his constitutional rights. Whitener agreed and explained in the court’s unanimous opinion that a defendant’s right to appear in court without shackles is rooted in English common law.

“I thought I could put a historical perspective on shackling and how dehumanizing it is, and why it is important that judicial offices do not defer to another institution, the correctional department, for such an important decision,” says Whitener, who remanded the case and instructed the court to make an individualized inquiry into whether restraints were needed at each stage of the proceedings.

Whitener is also thrilled by her inclusion on what could be the country’s most diverse high court, she says. There are seven women, four people of color and two LBGT justices on its bench, the Seattle Times reported in June. There is only one white man.

“We all bring our marginalized and nonmarginalized lenses to bear on the law,” Whitener says. “I think it has made it quite interesting and, hopefully, better for all.”

Whitener carries her love of storytelling into the courtroom 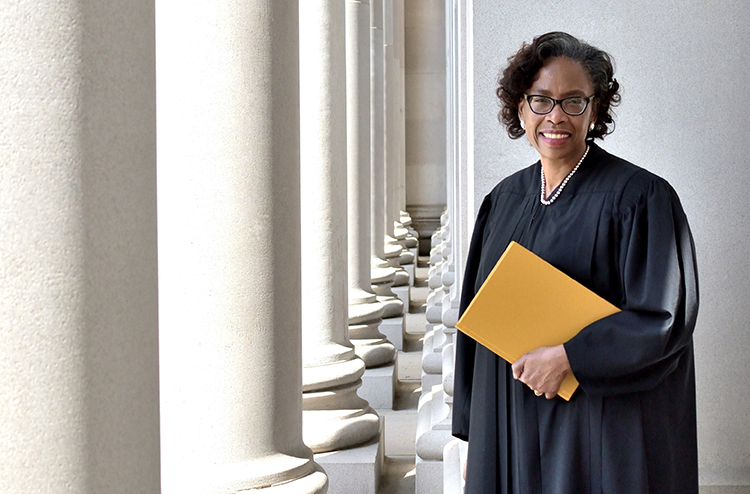 Whitener grew up in Trinidad and Tobago, an island country in the Caribbean.

Her father worked as a teacher and principal. Her mother was also a teacher, who taught her in high school. Whitener planned to follow the same path and study in England before returning home to teach at the university level.

But that didn’t happen. At school one day, Whitener became paralyzed on her right side and was taken to the hospital. Her doctors realized she needed more tests and sent her to New York City, where she would be near some of her family.

Whitener was diagnosed with a degenerative nerve condition and while undergoing rehabilitation, she talked with a cousin who went to Baruch College in New York City. She decided to apply to the school after learning she had completed enough studies to attend college in the United States.

She was 19 when she made the tough choice to come out to her parents. Her father supported her, she says, but her mother struggled with her declaration. They didn’t speak for several years.

“It was hard because in the Caribbean islands it was illegal, No. 1; and No. 2, people were very closed-minded,” Whitener says. “I was really concerned about what it would do to my parents, but I knew I couldn’t keep living a lie.”

Whitener earned her bachelor’s degree in business administration and international marketing, and worked in Alaska and Washington before going to law school. Then in her 30s, she had never considered a legal career, but a colleague who was an accountant and a lawyer suggested her analytical skills would serve her well in the field.

Whitener became a U.S. citizen while at the Seattle University School of Law. She graduated in 1998, knowing she wanted to be a trial attorney. She joined the ABA and spent the next 14 years litigating civil and criminal cases as a prosecutor and defense attorney, and then as a managing partner of her own firm.

“I like being able to tell a story and have it resonate with a group of people who have to make a decision and trying to persuade them to do what you believe is the right thing, irrespective of what side you’re on,” Whitener says. “I thought that was powerful.”

Whitener didn’t think about joining the bench until Judge David Kenworthy of the Pierce County District Court encouraged her to become a pro tem judge. While he visited family in England each December, she began covering his docket as well as the dockets of other judges in the district court and Tacoma Municipal Court.

She later served as a judge on the Washington Board of Industrial Insurance Appeals until Gov. Jay Inslee appointed her to the Pierce County Superior Court in 2015. By then, Whitener had reconnected with her mother, who shared the news with a reporter for Express Woman magazine in Trinidad and Tobago. Whitener was featured in a cover story that went viral in the Caribbean islands.

Whitener leads by example through LGBT work and mentoring

The article made it further than Whitener thought—all the way to the White House.

She was sitting in her chambers when she received a call from the U.S. Department of State. Then-President Barack Obama had proclaimed June 2015 LGBT Pride Month and National Caribbean-American Heritage Month. His administration asked Whitener to travel to Trinidad and Tobago to speak about LGBT rights. 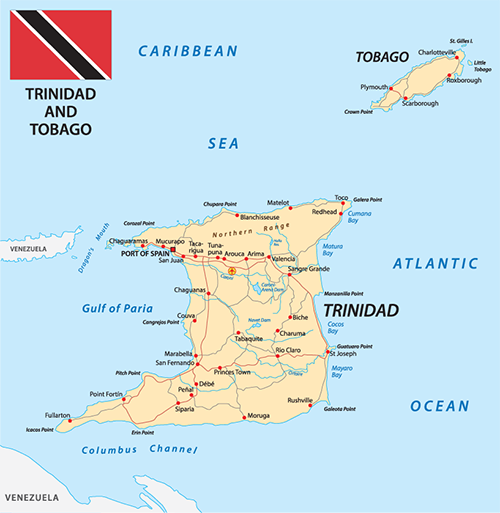 Same-sex couples encountered anti-LGBT laws in that country that carried penalties of five to 25 years in prison. And by then, Whitener had married Lynn Rainey, a retired U.S. Army command sergeant major and attorney.

“I said, ‘Yes, I would be interested, but I have to pass it by my wife. You’re asking me to go back to a place openly where I can be arrested,’ ” Whitener says. “But she was fine with it. We had the backing of the U.S. Embassy, so we felt relatively safe.”

Whitener sent an email to Obama, thanking him for the trip. He responded with copies of the signed proclamations and his own letter.

“America is strong because of our openness, our diversity and our legacy as a nation of immigrants, and your story speaks to the importance of one of our most fundamental principles—that no matter who you are, where you come from or who you love, all our people should have an equal chance to share in America’s promise,” Obama wrote in one of her favorite passages.

In 2018, Trinidad and Tobago’s high court ruled that laws criminalizing intimacy between same-sex couples were unconstitutional. In February, the ABA Commission on Sexual Orientation and Gender Identity presented Whitener with its Stonewall Award for her role in this effort and other LGBT causes.

Whitener believes in leading by example and shares this lesson with her mentees. She began mentoring Judge Lisa Mansfield, who presides over Lakewood Municipal Court and its Veteran’s Treatment Court in Washington, when she considered joining the bench.

“And even now, whenever there is a thorny issue about how to approach something, I can call her up and she will call me back. Her only caveat to me being a mentee of hers was that I in turn mentor others. That was the price that I had to pay, and I love paying that price.”

Whitener also encourages other judges to use their power strategically to help those in need.