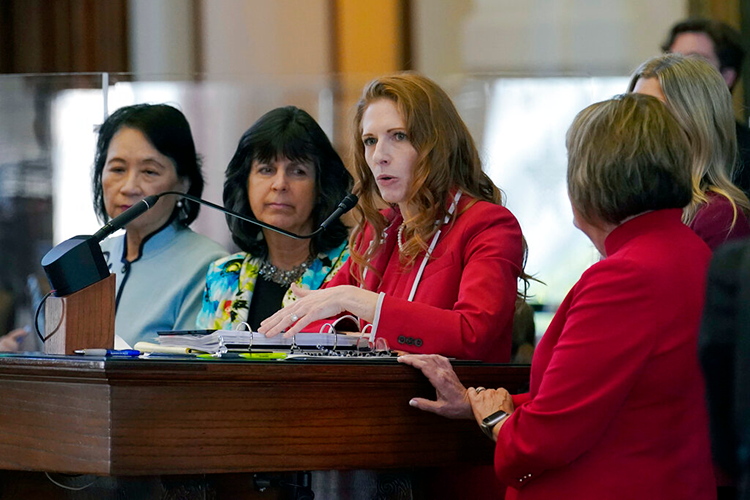 Texas state Rep. Shelby Slawson, R-Stephenville, center, stood with co-sponsors in May as she answered questions about a Texas bill that would allow private citizens to sue anyone who helps a pregnant person obtain an abortion. (AP Photo/Eric Gay)

Several abortion rights advocates and providers have filed a federal lawsuit challenging a new Texas law that permits private citizens to sue doctors, clinics and anyone else who knowingly helps a pregnant person get an abortion after a fetal heartbeat is detected.

“If not blocked, S.B. 8 will force abortion providers and others who are sued to spend massive amounts of time and money to defend themselves in lawsuits across the state in which the deck is heavily stacked against them,” the group wrote in its complaint, which was filed Tuesday in the U.S. District Court for the Western District of Texas. “Even if abortion providers and others sued in S.B. 8 lawsuits ultimately prevail in them—as they should in every case if only they could mount a fair defense—the lawsuits against them will still have accomplished S.B. 8’s goal of harassment.”

The new Texas law, which takes effect Sept. 1, prevents abortions after a doctor detects a fetal heartbeat, typically at about six weeks of pregnancy. It contains an exception only for medical emergencies but not for rape or incest.

As part of the law, anyone inside or outside of Texas can sue those who violate its terms and potentially be awarded at least $10,000 per illegal abortion if they are successful.

As the New York Times reports, abortion rights advocates have successfully challenged six-week abortion bans by suing government officials who were responsible for enforcing the laws. However, no state official is authorized to enforce the Texas law, a provision that seems intended to prevent abortion providers from suing the state in federal court to block enforcement.

In this case, the plaintiffs have instead filed a lawsuit against individuals who could be involved in the enforcement process, such as every state court trial judge and county clerk and leaders of the Texas Medical Board and Texas Board of Nursing.

Nancy Northup, the president and chief executive of the Center for Reproductive Rights, one of the groups representing plaintiffs in the case, said in a statement on Tuesday that they “will pursue every legal avenue” they can “to block this and other pernicious laws.”

“The state has put a bounty on the head of any person or entity who so much as gives a patient money for an abortion after six weeks of pregnancy, before most people know they are pregnant,” Northup said. “Worse, it will intimidate loved ones from providing support for fear of being sued.”

Stephen Vladeck, a constitutional law professor at the University of Texas at Austin, told the New York Times that it is unclear whether the plaintiffs’ lawsuit will be successful. They are suing judicial officials because there is no one else to sue, he said, not because they are bad actors.

Republican state Sen. Bryan Hughes, who sponsored S.B. 8, told the Washington Post that he “welcomes the opportunity to have this case heard in court.” He added that the law was about “protecting unborn babies and stopping illegal abortions.”

The U.S. Supreme Court in May agreed to hear a case involving the constitutionality of Mississippi’s ban on most abortions after 15 weeks of pregnancy. Justices will consider one question in Dobbs v. Jackson Women’s Health Organization: whether all previability prohibitions on elective abortions are unconstitutional.

According to Politico’s coverage at the time, the case is a direct challenge to Roe v. Wade, the case that prohibits states from banning abortions before a fetus is viable.