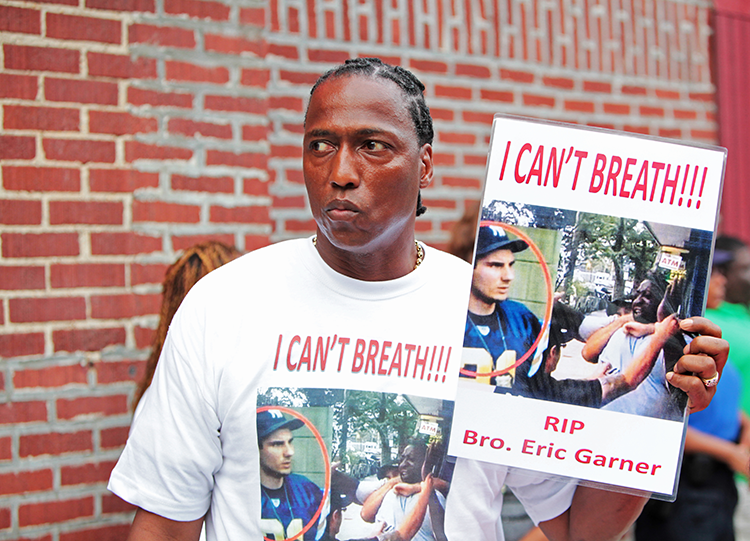 A mourner at Eric Garner’s 2014 funeral holds a sign with a still from the video of Garner’s death. (Photo by a katz / Shutterstock.com.)

• The U.S. Justice Department won’t charge the New York City police officer who put Eric Garner in a chokehold during an arrest for selling loose cigarettes. Garner cried out, “I can’t breathe” before his death. Brooklyn U.S. Attorney Richard Donoghue said the officer won’t be charged with a civil rights violation because of insufficient proof that he willfully used excessive force. State grand jurors declined to indict the officer in December 2014. His family settled a civil case against the city for $5.9 million. (The New York Times, the Washington Post)

• A San Francisco federal judge has reduced a verdict against the maker of Roundup from $80 million to $25 million. The plaintiff, Edwin Hardeman, had claimed the weed killer caused his cancer. U.S. District Judge Vince Chhabria said the punitive portion of the award was too high, although the conduct of Roundup maker Monsanto (later acquired by Bayer) was “reprehensible.” Trial evidence “painted the picture of a company focused on attacking or undermining the people who raised concerns,” Chhabria said. (The Wall Street Journal, Reuters)

• Cardi B is defending her courtroom attire after lawyer Joseph Tacopina complained to the New York Post that she is treating her court appearances “like a runway show.” The rapper, who is accused of assaulting two bartenders with a tossed hookah and champagne bottles, responded in Instagram videos. “I don’t dress inappropriate when I go to court,” Cardi B objected. “I dress like a f–king lady.” Tacopina represented the alleged victims. (Billboard, the New York Post here and here)

• A federal appeals court has ruled that Baltimore can’t condition settlements in police misconduct cases on gag orders. The 4th U.S. Circuit Court of Appeals at Richmond, Virginia, compared the orders to hush money and said they undermine the First Amendment right to criticize government. (The Washington Post and Courthouse News Service via How Appealing; 4th Circuit)

• A federal magistrate judge is recommending that the publisher of a neo-Nazi website pay $14 million for an internet harassment campaign against a Jewish real estate agent who asked the mother of a white supremacist to disavow her son. A default judgment has been entered against the defendant, Daily Stormer founder Andrew Anglin. He never showed up for a deposition, and his lawyers withdrew from the case (The Associated Press, the Southern Poverty Law Center)

• A Philadelphia judge has freed inmate Chester Hollman III based on prosecutors’ assertion that he was likely innocent. Hollman was convicted of murder 25 years ago. Prosecutors and police didn’t disclose evidence pointing to more likely suspects, and a witness admitted testifying falsely against him. (The Philadelphia Inquirer)