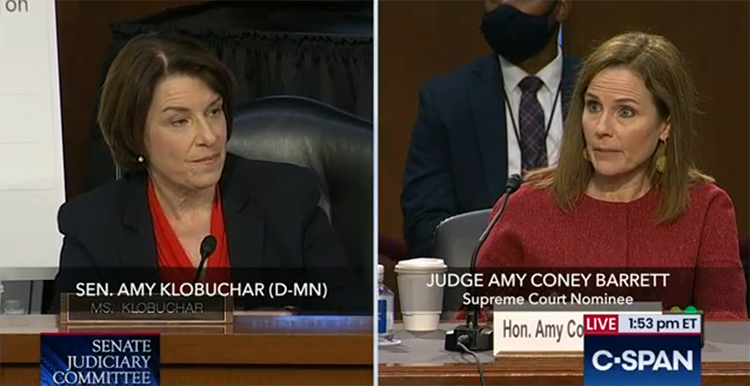 Judge Amy Coney Barrett, the U.S. Supreme Court nominee, has acknowledged that seven cases are “super precedent,” but Roe v. Wade isn’t one of them.

During Barrett’s confirmation hearing Tuesday, Democratic Sen. Amy Klobuchar of Minnesota noted that Barrett wrote a 2013 Texas Law Review article on the topic. Barrett listed seven cases that were generally regarded to be super precedent, including Marbury v. Madison and Brown v. Board of Education.

Klobuchar asked Barrett how she would define super precedent. Barrett said the term, as defined in the scholarly literature, means cases that are so well settled that no one calls for them to be overruled.

The Roe v. Wade opinion establishing a right to abortion “doesn’t fall in that category” because there are still calls for it to be overruled, Barrett said.

A precedent should not be overruled just because it doesn’t fall on the super precedent list, Barrett said. It just means that the decision isn’t among the cases that no one questions anymore.

• The legal tender cases, upholding the constitutionality of paper money.

• Mapp v. Ohio, holding that the Fourth Amendment applied to the states through the 14th Amendment.

• The civil rights cases, holding that the 14th Amendment applies to state action rather than individual acts of discrimination.