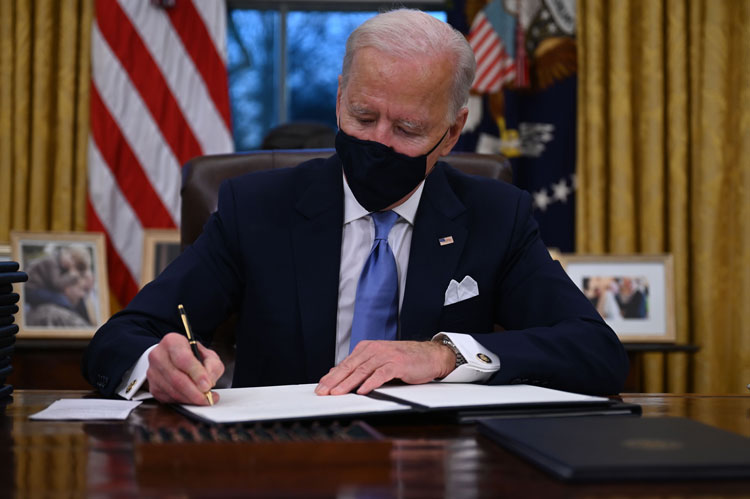 President Joe Biden sits in the Oval Office as he signs a series of orders at the White House in Washington, D.C., after being sworn in at the U.S. Capitol on Jan. 20. Photo by Jim Watson/AFP via Getty Images.

Executive orders, memoranda and proclamations signed by President Joe Biden on Wednesday aim to repeal many Trump administration policies that had been challenged in lawsuits.

The New York Times lists 17 directives by Biden, while the National Law Journal highlights some of the policies challenged in court. Biden’s actions include:

• An executive order repealing a plan to exclude noncitizens from the census reapportionment count. The U.S. Supreme Court dismissed a challenge to the plan in December, pointing out that the U.S. Census Bureau had said it may not be able to supply requested figures to President Donald Trump before he leaves office. It’s too soon to decide a case that is “riddled with contingencies and speculation that impede judicial review,” the Supreme Court said.

• A proclamation ending a national emergency declaration that freed up funds to build the wall on the Mexican border. In August, the Supreme Court refused to block Trump’s use of military funds for the project while legal challenges work their way through the courts.

• A memorandum requiring agency actions to preserve the program shielding from deportation immigrants who came to the United States as children. The program is Deferred Action for Childhood Arrivals, known as DACA. In June, the Supreme Court overturned the phaseout of the program because the Trump administration failed to “provide a reasoned explanation” for the decision. Biden also called on Congress to allow DACA recipients to obtain citizenship.

Biden also signed a letter to rejoin the Paris climate accords, took steps to revoke the permit for the Keystone XL pipeline and reverse environmental rollbacks, repealed an order barring federal agencies and their contractors from holding diversity training, and signed an order enhancing LGBTQ protections, according to CNN, USA Today and the Huffington Post.

Biden also ordered federal employees to pledge that they will uphold the independence of the U.S. Department of Justice, the Chicago Tribune reports.

Judge chides lawyers for 'tit-for-tat squabbles' and 'shenanigans,' sanctions one for shut-up command