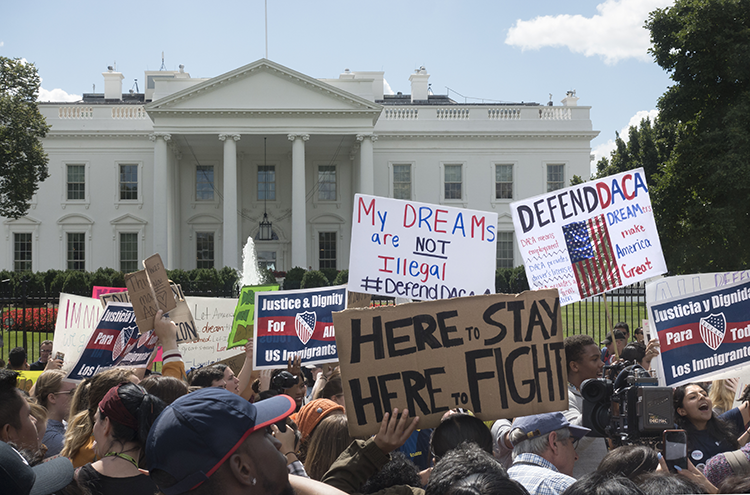 Protesters demonstrate in front of the White House to advocate for DACA recipients in 2017. Photo from Shutterstock.com.

The U.S. Supreme Court has overturned the Trump administration’s decision to phase out a program that deferred deportation for some immigrants.

The decision to rescind the program known as Deferred Action for Childhood Arrivals was arbitrary and capricious, the Supreme Court said in a majority opinion Thursday by Chief Justice John G. Roberts Jr.

The program, established during the Obama administration, defers deportation and grants work permits for immigrants brought to the country illegally as children. The U.S. Department of Homeland Security decided to phase out the program in 2017.

“The dispute before the court is not whether DHS may rescind DACA,” Roberts wrote. “All parties agree that it may. The dispute is instead primarily about the procedure the agency followed in doing so.”

The DHS failed to “provide a reasoned explanation” for its decision, a violation of the Administrative Procedure Act, Roberts said. The DHS will now have to “consider the problem anew.”

In her separate partial concurrence and dissent, Sotomayor said the majority rightly held that the DHS violated the Administrative Procedure Act in rescinding the program. But she said the court made an “unwarranted” determination to foreclose any challenge to the rescission under the equal protection clause.

ABA President Judy Perry Martinez emphasized the need for congressional action and a path to permanent legal status in a statement issued after the ruling.

“Today’s decision underlines the importance for Congress to act quickly to resolve the status of immigrants under the Deferred Action for Childhood Arrivals program,” Martinez said. “Consistent with the American ideals of fairness and opportunity, children should not be punished for the acts of their parents. The American Bar Association urges Congress to enact legislation that will allow DACA recipients to apply for permanent legal status and citizenship, provided they meet certain qualifications, pass a background check and remain in good legal standing.”

Roberts’ majority opinion focused on a September 2017 memorandum by Acting Secretary of Homeland Security Elaine Duke, in which she explained her decision to phase out the DACA program.

Duke issued the memorandum a day after then-Attorney General Jeff Sessions advised that the program was unlawful.

Duke’s memorandum referred to the U.S. attorney general’s advice and a federal appeals court decision blocking the Obama administration’s expansion of DACA and a separate program for parents. When that prior case reached the Supreme Court, the court split 4-4, which had the effect of upholding the appeals court.

Duke said in the memorandum that no new DACA applications would be accepted, although the agency “would entertain applications for two-year renewals” for those whose DACA benefits were set to expire in six months. Otherwise, grants of deferred deportation would be allowed to expire.

Roberts said the court had to review the agency’s justifications based on Duke’s memorandum, and Duke’s explanations were inadequate.

Duke should have considered reliance interests of people in the DACA program and the option of retaining forbearance of deportation, Roberts said.

“Had Duke considered reliance interests, she might, for example, have considered a broader renewal period based on the need for DACA recipients to reorder their affairs,” Roberts wrote. “Alternatively, Duke might have considered more accommodating termination dates for recipients caught in the middle of a time-bounded commitment, to allow them to, say, graduate from their course of study, complete their military service or finish a medical treatment regimen. Or she might have instructed immigration officials to give salient weight to any reliance interests engendered by DACA when exercising individualized enforcement discretion.”

A partial dissent by Justice Clarence Thomas called the majority decision “mystifying.” Thomas said DACA was unlawful from its inception because it was created without statutory authorization and without going through the required rule-making process.

Justice Brett M. Kavanaugh wrote a separate partial dissent. Kavanaugh said he would have also considered the Nielsen memorandum, which did “pass muster as an explanation for the executive branch’s action.”

By sending the case back to the DHS, “the only practical consequence” of the majority decision “appears to be some delay,” Kavanaugh said.

The cases are Department of Homeland Security v. Regents of the University of California, Trump v. NAACP and Wolf v. Vidal.

Hat tip to SCOTUSblog for its early summary of the case.

ABAJournal.com: “Supreme Court appears to side with Trump administration in its defense of ending DACA”