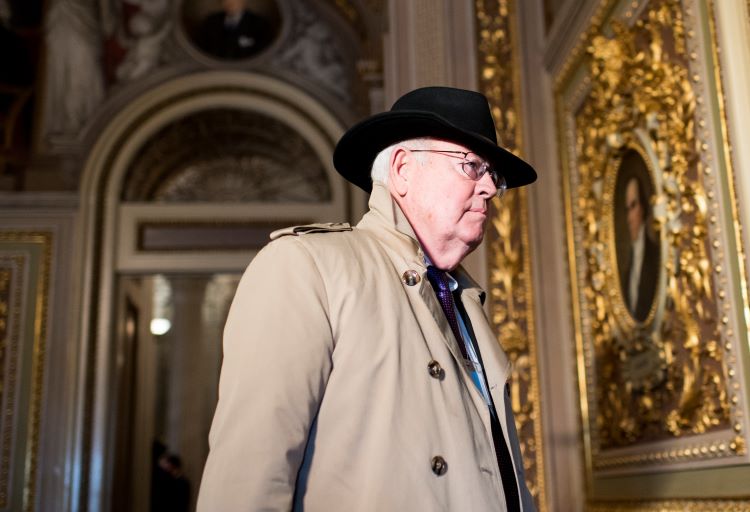 Ken Starr arrives in the U.S. Capitol for the start of the U.S. Senate impeachment trial proceedings for then-President Donald Trump in January 2020. Photo By Bill Clark/CQ Roll Call via the Associated Press.

His wife, Alice Starr, told the New York Times that Starr had been hospitalized for 17 weeks, but she did not disclose the illness.

Other publications with coverage include Law.com, the Associated Press and the Washington Post.

Starr served three terms on the ABA Journal Board of Editors in the 1990s.

Starr was appointed in 1994 to investigate an investment in the Whitewater Development Corp. that involved then-President Bill Clinton and then-first lady Hillary Clinton. Neither was charged in connection with Whitewater, but Clinton was accused of lying under oath about his relationship with intern Monica Lewinsky. He was impeached and acquitted in a U.S. Senate trial. 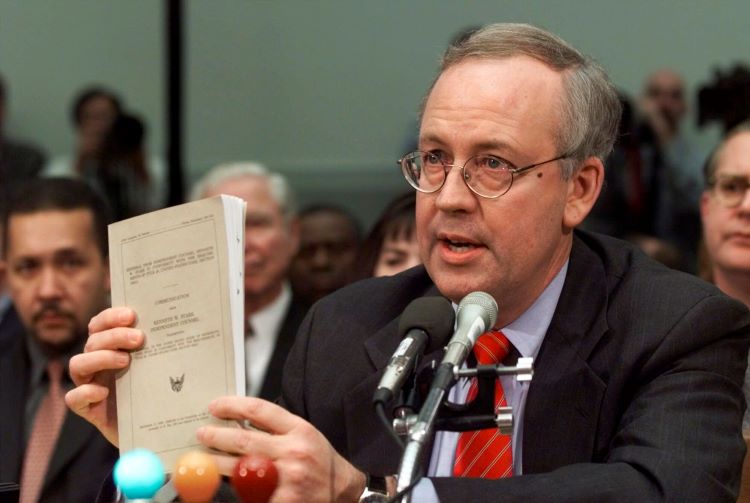 Ken Starr holds a copy of his report while testifying on Capitol Hill in November 1998 before the House Judiciary Committee’s impeachment hearing of then-President Bill Clinton. Photo by Doug Mills/The Associated Press.

Starr argued 36 cases before the U.S. Supreme Court when he was the U.S. solicitor general in the first Bush administration. He also was a judge with the U.S. Court of Appeals for the District of Columbia Circuit, president and chancellor at Baylor University, and dean of the Pepperdine University Rick J. Caruso School of Law. He joined the Texas-based Lanier Law Firm in 2018.

Starr resigned from Baylor University in 2016 after an internal probe found a “fundamental failure” in the school’s handling of allegations of sexual assault and dating violence by football players.

Alice Starr sent an email to colleagues and friends of the family Tuesday that said her husband was a “brilliant, kind and loving” man who “did not have a mean bone in his body,” according to the New York Times. Her family also released an obituary.

“Ever since law school, he was determined to fight for the rule of law, and he labored tirelessly to provide equal justice and religious freedom around the world,” Alice Starr wrote in the email. “Ken felt compelled to always respond to the call to serve his country, even when it meant enduring harsh criticism for his service. He was courageous and determined to work for a fair and just outcome no matter the task, and he never responded in kind to hurtful libel or slander.”

Chief Justice John Roberts, who worked with Starr in the Reagan administration, echoed those words in a statement Tuesday.

“Ken loved our country and served it with dedication and distinction,” Roberts said.

The Modern Law Library: Ken Starr shares his side of the Clinton investigation in ‘Contempt’ (2018)