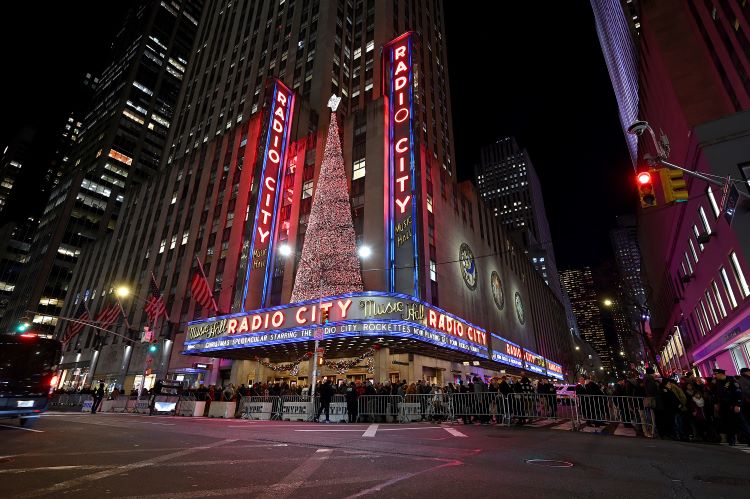 An exterior view of the Radio City Music Hall in New York on Dec. 9. Photo by Anthony Behar/Sipa USA via the Associated Press.

A New Jersey mom taking her daughter to see a show featuring the Rockettes as part of a Girl Scouts field trip was recently ousted from the Radio City Music Hall because facial recognition technology identified her as a lawyer at a law firm that sued a related venue.

The lawyer, Kelly Conlon, is an associate at Davis, Saperstein & Salomon in New Jersey, which has sued a restaurant owned by Radio City owner the Madison Square Garden Entertainment Corp.

She told NBC New York that a security guard stopped her in the Radio City lobby when she was there the weekend after Thanksgiving. Ars Technica noted the story.

Conlon waited outside, while her daughter saw the show.

Conlon said she is not personally involved in cases against Madison Square Garden Entertainment, and she doesn’t practice in New York. She told NBC New York that the experience was embarrassing and “mortifying.”

Madison Square Garden Entertainment sent this statement to NBC New York: “MSG instituted a straightforward policy that precludes attorneys pursuing active litigation against the company from attending events at our venues until that litigation has been resolved. While we understand this policy is disappointing to some, we cannot ignore the fact that litigation creates an inherently adverse environment. All impacted attorneys were notified of the policy, including Davis, Saperstein & Salomon, which was notified twice.”

Sam Davis, a partner at Davis Saperstein, told NBC New York that the ban “is absolutely absurd,” and the use of facial recognition technology to implement it is “frightening.” He plans to challenge Madison Square Garden Entertainment’s liquor license on the ground that it requires Madison Square Garden Entertainment to admit members of the public, unless they are disruptive or constitute a security threat.

Madison Square Garden Entertainment told NBC New York that safety is its highest priority, and facial recognition is just one method that it uses. The company also said it complies with all applicable laws, including New York liquor laws.

Conlon told NBC New York that she thought that a recent ruling in the case of another blacklisted firm made clear that ticket holders can’t be denied entry to shows. She may have been referring to a ruling in the case of a lawyer whose season tickets to New York Knicks games were revoked because of a suit against Madison Square Garden on behalf of ticket resellers.

In that suit, Judge Lyle E. Frank of New York ruled in November that New York civil rights law requires venues to allow entry to nonsporting events to anyone age 21 or older who is behaving appropriately and holding a valid ticket. But Madison Square Garden can refuse to sell tickets, and it can revoke tickets up until the time that they are presented at the door, Frank said.

After the decision, Madison Square Garden sent letters to lawyers with suits against it asserting that tickets that they obtain are revoked and invalid. The company also said it is appealing Frank’s decision.

On Nov. 22, a New York appeals court temporarily amended Frank’s decision, so that it applies only to the plaintiff who challenged Madison Square Garden Entertainment’s policy, Larry Hutcher, and to his firm, Davidoff Hutcher & Citron, Law360 reports. The narrowed ruling remains in effect pending a decision by the full appellate panel.