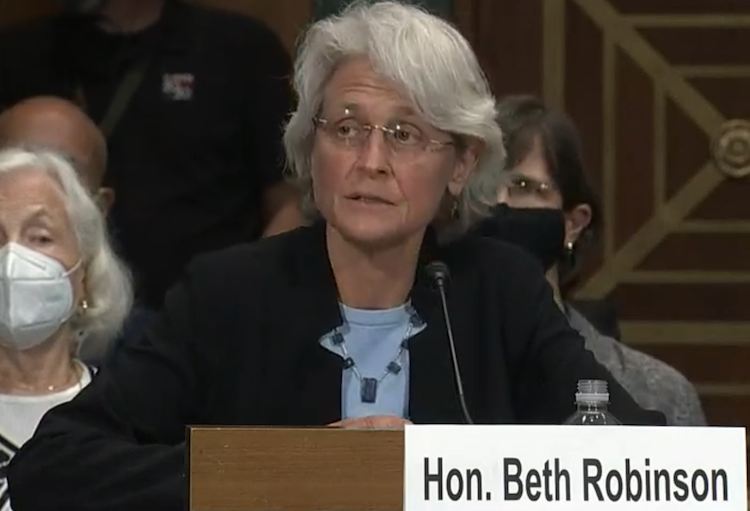 Vermont Supreme Court Justice Beth Robinson testifies on Sept. 14 before the Senate Judiciary Committee during her confirmation hearing to be a U.S. circuit judge for the 2nd Circuit. Image via the committee video/C-SPAN.

Robinson was one of two nominees confirmed to federal appeals courts, Law.com reports. The other is Toby Heytens, former Virginia solicitor general, confirmed to the 4th Circuit at Richmond, Virginia.

CNN and HuffPost also have coverage.

Robinson is a 1989 graduate of the University of Chicago Law School. She has served as an associate justice on Vermont’s top court since 2011. Before that, she was counsel to Vermont’s governor, a civil litigator at Langrock Sperry & Wool and an associate at Skadden, Arps, Slate, Meagher & Flom.

The circuit had shifted to a Republican-appointed majority of active judges during the Trump administration.

Twenty-eight of Biden’s federal court nominees have won confirmation so far, which is the most confirmations at this point in a presidency in modern history, according to HuffPost.