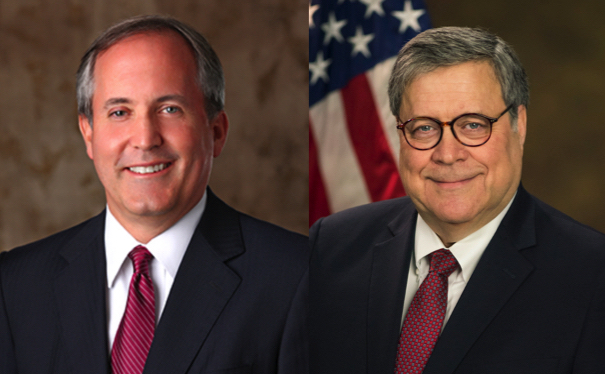 In Texas, the state attorney general, Ken Paxton, faces an ethics investigation for his failed U.S. Supreme Court bid to overturn the 2020 presidential election results in four battleground states, according to an exclusive report by the Associated Press.

But ethics officials in Washington, D.C., took no action against former U.S. Attorney William Barr, saying it wouldn’t intervene “in matters that are currently and publicly being discussed in the national political arena.”

Law.com has the story.

The D.C. complainants had sought a probe of Barr’s handling of the report by former special counsel Robert Mueller in 2019 and the clearing of peaceful protesters from Lafayette Square.

The State Bar of Texas initially declined to look into the complaint filed by a Democratic Party activist against Paxton, according to the AP. But a grievance tribunal ordered the probe.

The AP obtained a copy of letters confirming the investigation from the activist who filed the complaint, Kevin Moran. Paxton can reply to Moran’s claim that Paxton’s attempt to file the suit with the Supreme Court was made in bad faith. After that, a hearing will happen to determine whether to launch the disciplinary process.

In Washington, D.C., 27 attorneys had sought an investigation of Barr. But the D.C. Bar’s Office of Disciplinary Counsel informed Barr last year that there would be no full investigation, according to Law.com.

A staff attorney explained the reasons for declining to investigate in an August 2020 letter.

“Your complaint lacks personal knowledge of the facts or allegations concerning Mr. Barr,” the letter said. “In general, this office will not intervene in matters that are currently and publicly being discussed in the national political arena. If a complainant has no personal knowledge of the matter or if the evidence in the complaint seems insufficient to us, we may decline to docket the matter.”

Ethics experts who spoke with Law.com were alarmed by the rationale.

“So if you are high profile and you engage in purported misconduct in the national arena and people write articles about it, that immunizes you? That’s a strange theory,” said Bruce Green, a legal ethics expert with Fordham University’s law school who advised those who drafted the complaint against Barr.