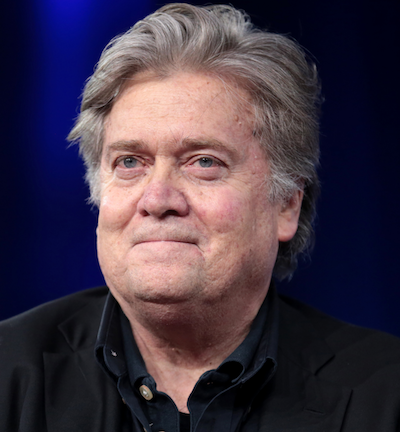 Steve Bannon in 2017. Photo by Gage Skidmore via Wikimedia Commons.

Steve Bannon is indicted for contempt of Congress

Steve Bannon, a former adviser to former President Donald Trump, was indicted Friday for contempt of Congress for failing to comply with a subpoena issued by the House committee investigating the Jan. 6 attack on the U.S. Capitol. Bannon is charged with two contempt counts, one for failure to appear for a deposition and a second for refusal to produce documents. Each count carries a sentence of up to one year in jail and a maximum $1,000 fine. The House had voted to hold Bannon in criminal contempt last month and referred the matter to the U.S. attorney in Washington, D.C. He’s expected to turn himself in Monday. (Department of Justice press release, Law.com, the New York Times, the Washington Post)

The U.S. Court of Appeals for the District of Columbia Circuit on Thursday temporarily blocked release of former President Donald Trump’s records relating to the Jan. 6 attack on the U.S. Capitol. The court blocked release of the records to a House committee pending an appeal. U.S. District Judge Tanya Chutkan of the District of Columbia had ordered the records to be released Tuesday, holding that President Joe Biden wasn’t required to honor Trump’s executive privilege claim. “Presidents are not kings, and plaintiff is not president,” Chutkan wrote. (Law.com, Law360, the New York Times, the Washington Post)

U.S. District Judge Judith E. Levy of the Eastern District of Michigan on Wednesday approved a $626 million settlement for people in Flint, Michigan, who were harmed by lead that leached into the city’s water supply. The state of Michigan is paying the largest amount at $600 million. Lawyers are seeking about $200 million in fees out of the total. (The Detroit Free Press, Reuters, the Nov. 10 order)

U.S. District Judge Phyllis Hamilton of the Northern District of California has tossed a lawsuit contending that consumers were misled about the location where King’s Hawaiian sweet rolls are made and what ingredients they contain. The suit contends that the phrase “Est. 1950, Hilo, Hawaii” led the plaintiffs to think that the product was made in Hawaii. The suit also claims that a logo resembling the crown of a pineapple led the plaintiffs to think that the product included Hawaiian ingredients, such as pineapple juice and honey. Hamilton said the package identifies the California location of the manufacturer and lists the ingredients. One of the lawyers for the plaintiffs is Spencer Sheehan, who also filed a lawsuit alleging that consumers are misled about the composition of the fruit filling in strawberry Pop-Tarts. (The Mercury News, Courthouse News Service)

A New York judge on Monday vacated 59 convictions and cleared one person of criminal charges in cases that had relied on work by three disgraced police officers. The Queens district attorney’s office had asked to toss the cases because the officers involved were later convicted of perjury, sexual assault or official misconduct. The district attorney’s office had reviewed the cases after a request by the Legal Aid Society and other groups that identified 20 officers who engaged in wrongdoing. Other district attorneys in New York City are also reviewing cases as a result of the letter. (The New York Times)

Law firm travel volume is at 30% of 2019 levels, according to Lawyers Travel, which represents more than half of the nation’s most profitable law firms. The company projects higher numbers in 2022, when it expects that the year will end at 65% of 2019 levels. (Reuters)