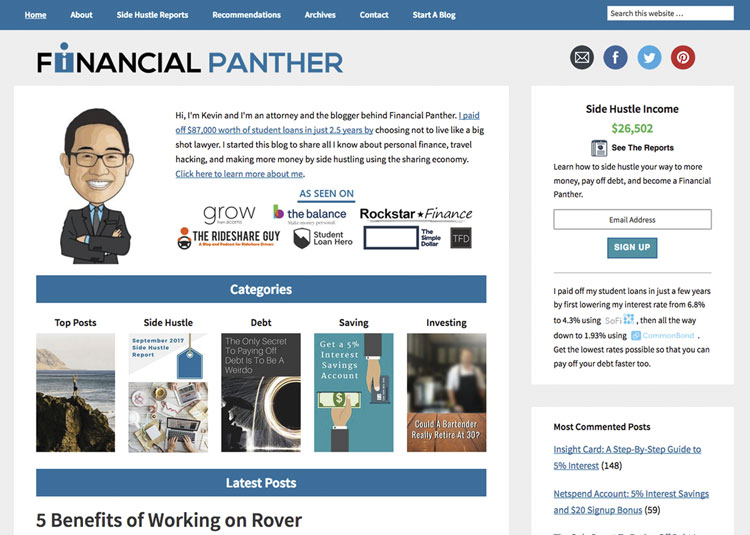 NEW: This blog is less about the law than one lawyer’s quest. Kevin, the “Financial Panther,” says he managed to pay off about $87,000 in law school loans in less than three years, which allowed him to break his BigLaw chains and take a government job at a $50,000 pay cut. But he maintains “side hustles” to supplement his income on his terms, and he documents these efforts on his blog.

NEW: “While there are a few blogs that cover [Freedom of Information Act] news, this is consistently one of the best,” Ambrogi says. The bloggers summarize and link to the latest FOIA-related court opinions, reports from the Department of Justice’s Office of Information Policy and FOIA-related op-eds. They also solicit questions from readers about FOIA to answer in their posts.

For more than a decade, criminal defense attorney John Wesley Hall Jr. has posted multiple brief daily summaries of search-and-seizure cases in state and federal courts. His site has pages devoted to links to Fourth Amendment rulings from each state, and a page listing links to Fourth Amendment rulings by the U.S. Supreme Court dating back to Boyd v. United States (1886).

HALL OF FAME: This blog covers legislation in all 50 states affecting the courts. “Gavel to Gavel is the leading source of reliable news about under-the-radar developments in judicial administration throughout the country,” says Eugene Volokh of the Volokh Conspiracy blog.

NEW: This employment law blog by Eric Bachman of Zuckerman Law focuses on promotion discrimination against women and racial minorities in corporate America. Posts cover awards in such cases from juries and arbitrators, note shocking court rulings in such cases, and highlight the latest statistics that demonstrate the prevalence of this form of discrimination.

NEW: Jeremy Richter is “an insurance defense attorney, aka a jerk who prevents me from getting my payday on a regular basis,” says John Tabler, a lawyer at Lau & Associates in Reading, Pennsylvania. “He’s also a damn good writer on a variety of legal and not-so-legal topics. His posts range from commercial trucking issues to the history of anti-miscegenation law in Alabama. The common thread? It’s always—always—an interesting read.”

Daily posts by dozens of University of Pittsburgh law students and faculty focus on news in the United States and around the world with the most significant jurisprudential and social implications—as opposed to the legal news that might be trending on Twitter.You also can search Jurist’s archive specifically for U.S. news; global news; “This Day at Law” trivia; and commentary from law professors, practicing lawyers and law students.

NEW: This blog, based at the Center for Human Rights and Global Justice at the New York University School of Law, covers news related to U.S. national security law and policy. Then it analyzes that news and contrasts U.S. policy with international law. In the Trump era, the president’s national security-related tweets and news reports on the same topics are noted in the blog’s Early Edition posts every weekday.

Matt Leichter’s blog originally launched in 2010 as the Law School Tuition Bubble. But he rebranded it in July 2015 after shifting its primary focus from law school tuition to student debt and legal education in general. Leichter is all about the data—what it shows about job outcomes for law grads, exploring the “law-school tipping point” with regard to LSAT scores, and questioning the quality of available data. He also stores original research that he posts about at this blog.

HALL OF FAME:  National security issues have come to the fore in Donald Trump’s presidency, and Lawfare is the blog to turn to for a take on the full legal implications behind the latest shocking headlines. Beyond that, posts cover foreign policy, cybersecurity law and policy, and the legal questions and challenges arising from turmoil in the Middle East.

NEW: The posts at the law blog of Tel Aviv, Israel-based LawGeex cover what tech tools lawyers should be using and news in the legal tech industry generally. The blog also has started posting a series of monthly interviews with in-house counsels about how they use legal technology to enhance productivity. Richard Granat, founder and CEO of DirectLaw Inc., likes the blog’s coverage of new developments in artificial intelligence and law.

NEW: This blog—founded by Dan Abrams, an ABC News legal analyst—covers high-profile criminal trials, celebrity-related legal news and legal issues emerging from President Donald Trump’s administration. Posts are sorted into categories that include “celebrity,” “important,” “crazy” and more, so readers can peruse the news they’re in the mood for. Live feeds for ongoing high-profile trials also are available.

The pace of posting is a little slow on this blog. But the work of co-moderators Deborah J. Merritt, a professor at Ohio State University’s law school, and Kyle McEntee, executive director of Law School Transparency, keep a tight focus on the systemic challenges facing law schools and recent law graduates. They grind the data to get a grip on the extent of the problems being faced and provide pointed commentary.

Jordan Furlong “is not a frequent poster, but when he does post, it is always worth reading,” Ambrogi says. “He is one of the leading commentators on where the profession is and where it is heading.” Furlong also has a recent, self-published book about why clients, rather than law firms, have the power in today’s legal market.

This is an Above the Law-style blog that focuses on the legal profession in the United Kingdom. Multiple posts per day on Legal Cheek focus on the latest in law firms, law schools, lawyer discipline and legal gaffes. The blog also recently updated its rankings of the top 60 London law firms and the top 50 barristers’ chambers—and added three new law school “most lists,” ranking the top schools for graduate degrees in law, legal practice courses and bar professional training courses.

NEW: Bill Henderson, a professor at the Indiana University Maurer School of Law, shuttered his longtime blog the Legal Whiteboard this year to start up Legal Evolution, in which he tracks innovations in the industry and legal education and covers lagging legal productivity. Henderson is “a deep, dedicated thinker who is always worth reading,” Flaherty says.

Robert Ambrogi, writer of the LawSites blog and co-host of the Lawyer2Lawyer podcast

Casey Flaherty, legal operations consultant and principal at Procertas and blogger at 3 Geeks and a Law Blog

Staci Zaretsky, editor for Above the Law