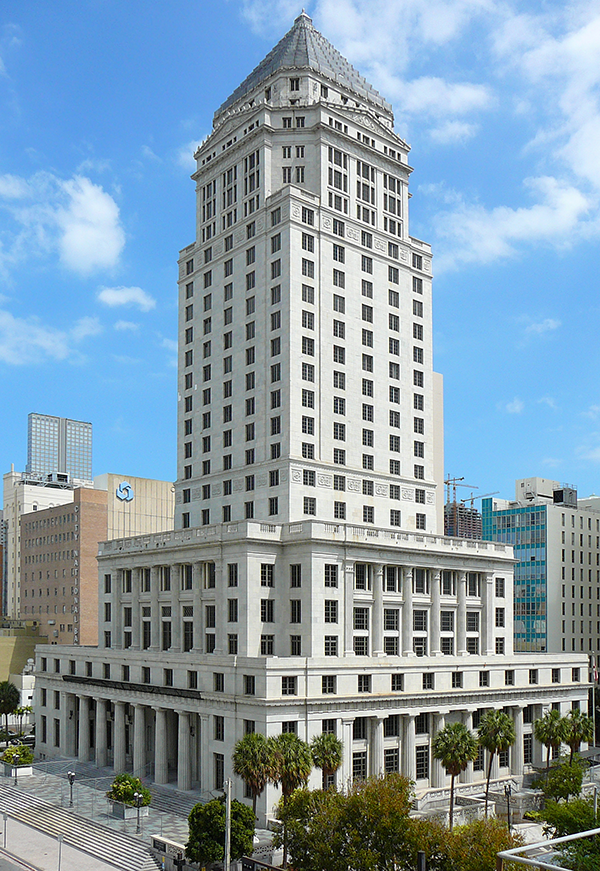 Photo of the Miami-Dade County Courthouse by Averette/Wikimedia Commons.

The Miami-Dade County Courthouse began undergoing immediate repairs on Friday after an engineering firm that examined the 28-story building identified safety concerns with various floors. Miami-Dade County Mayor Daniella Levine Cava, Miami-Dade Circuit Court Chief Judge Nushin G. Sayfie and Miami-Dade Clerk of Courts Harvey Ruvin announced they had asked engineers to assess all county buildings in response to the June 24 condo building collapse in Surfside, Florida. They said floors 16 and above of the courthouse will be closed and all staff will return to working from home until repairs are completed. All court business will also be conducted remotely. (The Associated Press, July 9 statement)

A nonpartisan group of lawyers said on Monday that they oppose two Republican governors’ deployment of National Guard troops to the southern border. Lawyers Defending American Democracy criticized South Dakota Gov. Kristi Noem and Texas Gov. Greg Abbott, writing in a statement that regulation of immigration and control of the border between Texas and Mexico are federal responsibilities. “Lawyers Defending American Democracy strongly opposes the South Dakota mini-deployment to Texas,” the group said. “This action by Texas, aided and abetted by South Dakota, serves to frustrate federal policy and needlessly complicates the task of the federal officials who are charged with its enforcement.” (The Hill, July 12 statement)

Judges, attorneys speak to lawmakers about need for diversity on federal bench

Judges and attorneys told members of the House Judiciary Committee on Monday that necessary steps to diversifying the federal bench include making law school more accessible to diverse communities, providing clerkships to students from regional law schools and opening the selection process to nontraditional candidates, such as immigration attorneys and public defenders. “There is much more work to be done; one only needs to look at the current composition of our courts to see that,” U.S. Rep. Hank Johnson, chair of the Subcommittee on Courts, Intellectual Property, and the Internet, said during the hearing. “For highly qualified lawyers that don’t fit a certain profile, the path to the federal bench can seem as narrow as a tightrope.” Most federal judges are white, male former prosecutors or corporate law firm partners, and graduates of Ivy League schools. (Law.com, Courthouse News Service, Law360)

The “ministerial exception,” which protects religious organizations from discrimination lawsuits brought by employees who qualify as ministers, applies to hostile work environment claims, the 7th U.S. Circuit Court of Appeals at Chicago held in a 7-3 en banc ruling on Friday. Sandor Demkovich, the former music director, choir director and organist at St. Andrew the Apostle Parish in Calumet City, Illinois, filed the lawsuit against the church and the Archdiocese of Chicago in 2016. He claimed the priest at the church subjected him to a hostile work environment based on disability and that he was harassed and fired for entering into a same-sex marriage. In writing for the majority, Judge Michael Brennan said that “the contours of the ministerial relationship are best left to a religious organization, not a court.” (Reuters, Bloomberg Law, Courthouse News Service, July 9 ruling)