Can Rep. Marjorie Taylor Greene be banned from reelection? 14th Amendment at issue 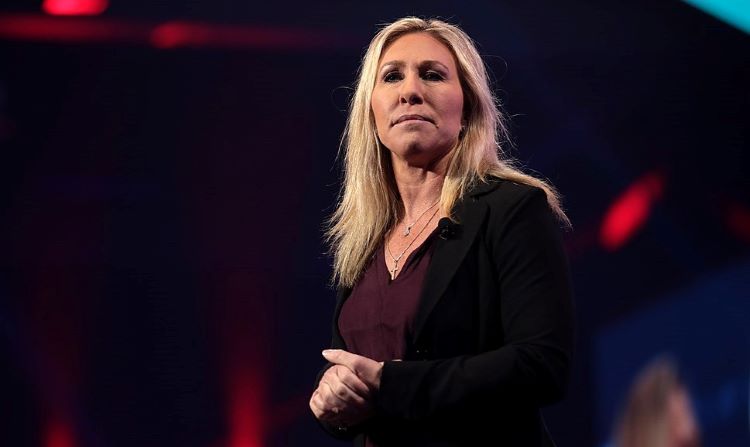 Republican U.S. Rep. Marjorie Taylor Greene of Georgia speaks with attendees at the 2021 AmericaFest at the Phoenix Convention Center in Phoenix. Photo by Gage Skidmore, CC-BY-SA-2.0, via Wikimedia Commons.

Georgia voters who want to ban a reelection bid by Republican U.S. Rep. Marjorie Taylor Greene got a boost Friday, when a federal judge in Atlanta indicated that she will likely allow the election challenge.

At issue is whether Greene can be banned from running under the 14th Amendment’s disqualification clause because she aided an insurrection: the Jan. 6, 2021, U.S. Capitol riot.

Totenberg indicated Monday in a notice posted on PACER that she plans “to rule expeditiously on this matter this week.” A state administrative judge had planned to begin hearings Wednesday but has now continued the matter, eliminating the need for an immediate ruling by Totenberg.

The voters’ challenge contends that Greene isn’t eligible to run for reelection under the 14th Amendment’s ban on office holders who “engaged in insurrection or rebellion” or aided the enemy, according to CNN, the New York Times and Bloomberg Law.

The voters are represented by Free Speech for People, which has also sought to block Republican U.S. Rep. Madison Cawthorn of North Carolina from running for reelection. The group failed in Cawthorn’s case, when U.S. District Judge Richard Myers II of the Eastern District of North Carolina issued an injunction March 10 that prevented the North Carolina proceeding.

Myers accepted Bopp’s argument that is based on the last sentence of the disqualification clause, which reads, “Congress may by a vote of two-thirds of each House, remove such disability.” Congress did remove the disability—the ban on holding office—when it passed the Amnesty Act of 1872, Myers said. The act said all political disabilities under the disqualification clause were “hereby removed from all persons whomsoever.”

The 4th U.S. Circuit Court of Appeals at Richmond, Virginia, granted an expedited appeal in the Cawthorn case April 7 but refused to stay Myers’ ruling pending the appeal.

Totenberg noted Myers’ ruling but said she didn’t find it persuasive. Totenberg said she thought that the amnesty law protected prior, but not future, insurrectionists.

Cawthorn and Greene deny being insurrectionists. Greene has said she never encouraged political violence, and banning her reelection bid would violate her First Amendment rights.

The suit against Greene cites several of her comments, including that she “promoted the demonstration ahead of time;” that the Jan. 6, 2021, demonstration was “our 1776 moment;” and that she described the rioters as “patriots.” She urged her supporters to come to the Capitol on Jan. 6, 2021, and she posted a video saying then-President-elect Joe Biden and Speaker of the House Nancy Pelosi are guilty of treason.

“You can’t allow it to just transfer power ‘peacefully’ like Joe Biden wants and allow him to become our president because he did not win this election,” she said in the video.

Bopp has said the suit against Greene consists of “50 pages of newspaper articles, hearsay and political hyperbole.”

Free Speech for People has expanded its effort to bar some office holders from reelection, according to the New York Times. Last week, the group filed candidacy challenges against three Arizona Republicans. Two are U.S. representatives, and a third is a state representative running for secretary of state with the endorsement of former President Donald Trump.

The 14th Amendment’s disqualification clause is in Section 3.

It provides in full: “No person shall be a senator or representative in Congress, or elector of president and vice president, or hold any office, civil or military, under the United States, or under any state, who, having previously taken an oath, as a member of Congress, or as an officer of the United States, or as a member of any state legislature, or as an executive or judicial officer of any state, to support the Constitution of the United States, shall have engaged in insurrection or rebellion against the same, or given aid or comfort to the enemies thereof. But Congress may, by a vote of two-thirds of each House, remove such disability.”

According to the New York Times, “The legal fight in the cases has come down to two questions: What is an insurrectionist, and did Congress in 1872 not only grant amnesty to those who supported and fought for the Confederacy but also to those who would take part in future insurrections, effectively nullifying Section 3?”

ABAJournal.com: “Lawyer is accused of climbing down wall, entering Capitol during Jan. 6 riot”